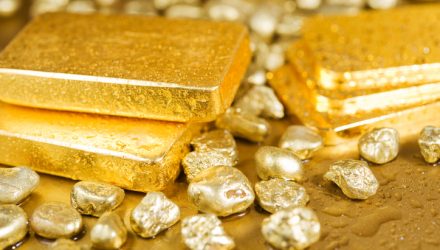 With the near-term fate of riskier assets, such as equities, in question, investors are embracing familiar safe-havens, including gold. The SPDR Gold Shares (NYSEArca: GLD) rallied in May as bullion topped $1,300 per ounce late in the month and data suggest investors are putting money to work with gold exchange traded funds.

“Holdings in SPDR Gold Shares surged by the most in almost three years as the US-China trade war, signs of a slowdown, and speculation the Federal Reserve will cut rates combined to fan demand,” reports Bloomberg.

GLD is the world’s largest ETF backed by physical holdings of gold.

“Assets in the SPDR ETF jumped 16.44 tonnes, or 2.2 per cent, on Monday to post the biggest gain since July 2016, while a tally of holdings in all ETFs saw the biggest increase this year. The swing towards the traditional haven came as gold prices surged above US$1,300 an ounce to hit the highest since February,” according to Bloomberg.

Furthermore, the value of gold has risen steadily over the years.

“Gold is once again trying to reclaim its role as a safe haven amid growing trade tensions and consequent risks to growth,” Joni Teves, a strategist at UBS Group AG, said in a note, reports Bloomberg. “The price “looks like it is getting comfortable above US$1,300, with aspirations of testing this year’s highs,” she said.”