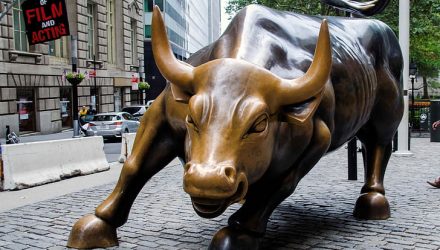 Are Commodities Setting Up for a 2021 Bull Market?

A week after reporting earnings, Delta Air Lines jumped more than 7 percent last Thursday after the carrier announced it would continue to block the middle seat until at least January of next year. This increase helped its share price climb above the 200-day moving average for the first time since February, which many traders see as a bullish signal. 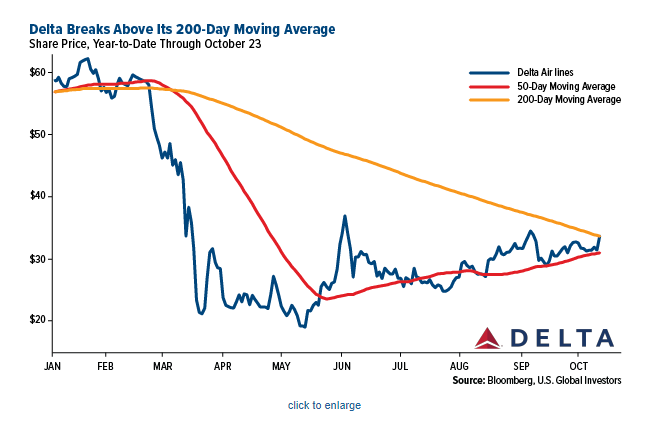 Delta and Alaska Airlines will be the only remaining major U.S. carriers that still block the middle seat after Southwest Airlines begins filling the seat on December 1. The low-cost carrier said in a tweet that it would unblock the middle seat after November 30, citing a body of research that supports the notion that masks and ventilation sufficiently protect passengers from the virus.

Among the studies was the one I shared with you the week before last. The Department of Defense (DoD) found that mask-wearing passengers are at very low risk of being infecting with the coronavirus, even on a packed flight.

“It is a very safe environment with all of the air-filtering technology and wearing masks,” Southwest CEO Gary Kelly told CNBC last week. “The science supports that.”

We continue to see the domestic airline industry recover off the April lows. Yesterday, the number of people cleared to fly commercial in the U.S. was just under 1 million. That was the second highest pandemic-era amount since Sunday, October 18, when more than 1,032,000 passengers boarded flights.

Goldman: Get Ready for a Commodities Bull Market

Jet regrade—the relative strength of jet fuel prices versus diesel—looks primed for a bull market in 2021 as flight demand continues to increase, according to Goldman Sachs. By next summer, jet fuel demand is expected to be higher by 3.9 million barrels per day than where it stands right now.

Among other commodities that could also surge next year, the investment bank says, are silver, copper, gold, natural gas and Brent crude oil.

In a note to clients, Goldman analysts cited a weaker dollar, inflation and additional monetary and fiscal stimulus as reasons for a potential rally in commodity prices. A 12-month return of 30 percent is forecast for the S&P GSCI, which tracks 24 commodities from all commodity sectors. Industrial metals, including copper, could increase 5.5 percent; precious metals, 18 percent; and energy, more than 42 percent.

Here at U.S. Global Investors, we’re very bullish on commodities, particularly industrial and precious metals. The manufacturing PMI in a number of countries shows that factories are expanding capacity on a greater number of new orders. In August, the U.S. manufacturing PMI registered 56.0, the highest reading since November 2018. The PMI in China—the world’s biggest importer of metals and other raw materials—was 51.5 last month, well above the five-year average of 50.6.

As I’ve noted before, commodities continue to look remarkably cheap relative to stocks. Below is a chart showing the ratio between the S&P GSCI and S&P 500. At no other time going back to 1972 have commodities been as undervalued as they are today. If Goldman’s projections turn out to be accurate, now could be a phenomenal buying opportunity. 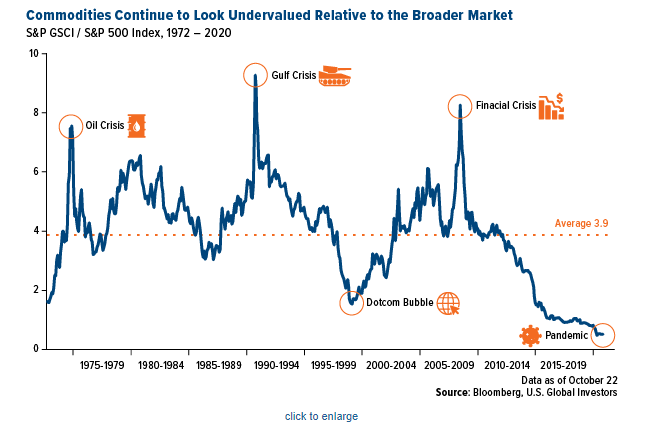 Doctor Copper Briefly Crosses Above $7,000 a Tonne, Thanks in Large Part to China

“Doctor copper” is so named because its price is seen as a good indicator of economic health. If that’s the case, then the economy isn’t nearly as bad as we thought it was.

In intraday trading last Wednesday, copper briefly crossed above $7,000 a tonne, its highest level since June 2018. From its low in late March, the red metal has risen close to 50 percent on hopes of further government stimulus and increased demand, particularly from the renewable energy industry and China. 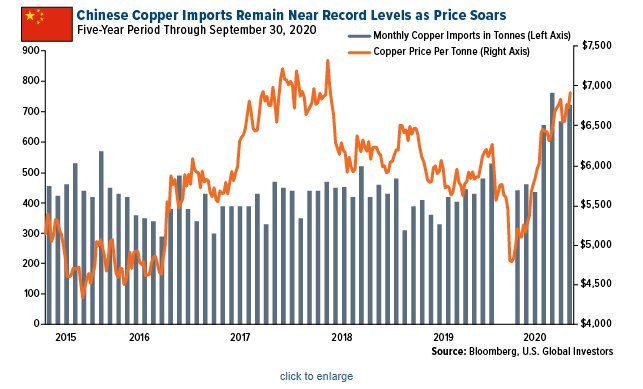 That includes renewable energy projects such as wind and solar. According to a report this month by the Global Wind Energy Council (GWEC), China led the world in adding new offshore wind capacity in 2019, with 2.4 gigawatts (GW) installed, representing nearly 40 percent of total new wind power across the globe. 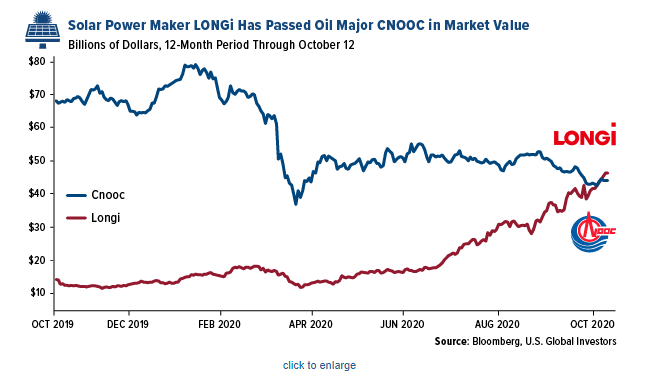 I expect China’s appetite for metals and other raw materials to keep pace as it continues to stimulate its economy—which managed to grow, I should add, an historically low and yet impressive 4.9 percent in the third quarter compared to the same period last year.

We’ll receive third-quarter economic data for the U.S. on Thursday this week. I hope to see a huge improvement over the second quarter, when real GDP fell at an annual rate of 31.4 percent, according to Bureau of Economic Analysis (BEA).

I’m very excited to share with you that I’ll be participating in the first-ever Virtual Junior Mining Expo, featuring 10 top junior mining companies. This virtual event is co-hosted by my friends at Streetwise Reports, and it will take place Thursday, November 12, at 1:00 pm Eastern. What’s more, it’s absolutely free.

To register for the event, please click here. I hope you’ll join us!

The S&P 500 Stock Index is a widely recognized capitalization-weighted index of 500 common stock prices in U.S. companies. The S&P GSCI is widely recognized as a leading measure of general price movements and inflation in the world economy. It provides investors with a reliable and publicly available benchmark for investment performance in the commodity markets.

Holdings may change daily. Holdings are reported as of the most recent quarter-end. The following securities mentioned in the article were held by one or more accounts managed by U.S. Global Investors as of (09/30/2020): Delta Air Lines Inc., Alaska Air Group Inc., Southwest Airlines Co.