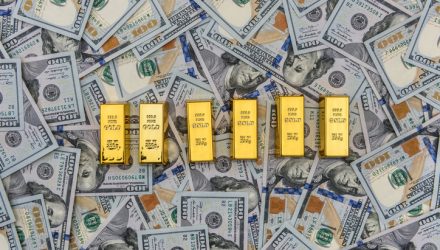 Another Big Year Is in the Works For Gold ETFs

Actually, it already is. GLD, the world’s largest gold ETF, is higher by 3.33% to start the new year and some market observers believe there’s more upside looming for the yellow metal as investors look for safer assets amid the coronavirus epidemic and concerns about the potential for more geopolitical tensions.

“At the same time, the US drone strike that killed the top Iranian military commander marked a dramatic escalation in tensions in the Middle East and subsequently pushed the gold price to near seven-year highs,” said Townsend. “It’s safe to assume the trade war will not be resolved overnight and therefore protectionist policies will keep central bank demand for gold strong. Meanwhile, while one hopes that a peaceful resolution is achieved in the Middle East, any further deterioration in relations will only provide support to safe-haven gold demand.”

Last year, GLD and GLD jumped amid increased expectations of a U.S. rate cut, even as some investors locked in profits from bullion’s recent rally. Gold is believed by many investors to be inversely correlated with interest rates. Rising interest rates make bonds and other fixed-income investments more attractive so that the money will flow into higher-yielding investments, such as bonds and money market funds, and out of gold, which offers no yield at all during times of higher interest rates, and back into gold ETFs.

The World Gold Council argued that the precious metal could shine after the major monetary policy shift out of the Federal Reserve last year. Gold has historically performed in the 12 to 24 month period following policy shifts from tightening to “on-hold” or “easing”. Additionally, when real rates have been negative, gold’s average monthly returns have been double their long-term average.

Investors rushing to GLD, GLDM and related ETFs as a quick and easy way to gain exposure to gold price movements as they hedge against market risks, help protect their purchasing power in times of inflationary pressures or capitalize on increasing demand from the emerging markets with a growing middle-income class.