You are at:Home»Alternatives Channel»And Just Like That, Buffett Likes Gold 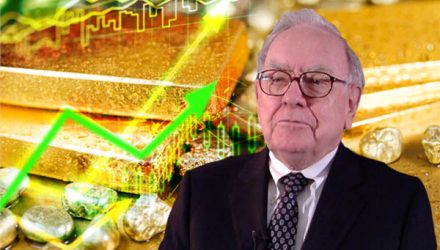 A quote often attributed to legendary investor Warren Buffett is that gold “gets dug out of the ground in Africa… Then we melt it down, dig another hole, bury it again and pay people to stand around guarding it. It has no utility. Anyone watching from Mars would be scratching their head.”

Even if Buffett never actually said that, it’s well known among long-time gold investors that the Berkshire Hathaway chief has been opposed to investing in the yellow metal. The primary reason? It doesn’t pay a dividend.

And do you know what else has never paid a dividend? Berkshire Hathaway.

Leaving aside the fact that gold does indeed have a variety of utilities, from jewelry to electronics to dentistry and medicine—not to mention currency—the metal’s per-ounce price has outpaced Class A shares of Berkshire so far this century, as of August 17.

That’s why Buffett’s flip-flop on gold sent shockwaves throughout financial markets. After Friday’s close, Berkshire unexpectedly announced that, as of the end of the second quarter, it held a $565 million position in Barrick Gold, the world’s second largest producer of the metal.

Shares of Barrick jumped nearly 12 percent at the market open on Monday and closed above $30 for the first time since February 2013.

Buying Gold as a Strategy to Minimize Currency Debasement

So why did Buffett change his mind?

I believe he finally came to the realization that he could no longer afford to ignore gold and gold producers. He’s famously come to the same realization with other businesses and industries. Buffett, who turns 90 later this month, acknowledged that he missed Amazon and Google early on because he didn’t understand them, and yet today Berkshire holds shares of Amazon.

But why gold specifically, and why now?

In case you haven’t noticed, governments around the world, including the U.S. government, have responded to the pandemic-caused economic slowdown by implementing unprecedented levels of monetary and fiscal stimulus. We’re currently awaiting the details of a second U.S. coronavirus stimulus bill, which will follow the $2.2 trillion CARES Act, passed in March. Meanwhile, the Federal Reserve has been buying trillions of dollars’ worth of financial assets, including—for the first time ever—ETFs that invest in corporate bonds.

With so much money being printed out of thin air, many investors have rightfully been concerned about currency debasement, which is the lowering of a currency’s purchasing power. The direct result of this is inflation since the U.S. dollar may not buy as much as it did yesterday.

It’s helpful to think of inflation as a “tax” on your wealth. Historically, investors have sought to avoid having to “pay” this tax by buying real assets such as land, real estate, natural resources and, yes, gold. Although they don’t generate income the way some stocks and bonds do, these kinds of assets can be attractive because they’re believed to hold their value better than cash.

This is largely the reason why we saw spot gold trade up to a new all-time high of $2,071 an ounce earlier this month. Total holdings in all known physical gold-backed ETFs also hit a new record high this month, according to Bloomberg.

Barrick Has Been Raising Its Dividend for the Past 10 Years

What about investors like Buffett who want exposure to gold but also seek income? That’s where gold mining stocks come in.

Berkshire may not pay a dividend, but many gold stocks do, including Barrick. The Toronto-based producer, in fact, has been growing its dividend pretty regularly over the past 10 years. Barrick’s one-year dividend growth rate as of this month was an attractive 35.3 percent, according to Bloomberg data. Just last week, the company hiked its dividend by 14 percent to $0.08 per share as hundreds of other companies have had to suspend their payouts due to the pandemic.

It’s easy to see why Buffett chose Barrick as his entry point in metals and mining. It’s been a top performer. Barrick reported net income of $417 million on revenue of $3 billion in the second quarter, the most since 2013. For the year as of August 18, the stock has returned more than 62 percent.

Buffet Changed His Mind. Will Others?

Buffett isn’t the only big-name investor who’s recently changed his mind about gold.

In January 2019, billionaire investor Sam Zell, founder of Equity Group Investments, disclosed that he had bought gold for the first time in his life because he believes it’s a “good hedge.” Later that year, hedge fund manager Paul Tudor Jones told Bloomberg that gold was his favorite trade for the next 12 to 24 months.

Will other anti-gold investors change their minds about the “barbarous relic,” to borrow British economist John Maynard Keynes’ famous jab of the precious metal? There’s no telling, of course, but what I can say is that I believe it’s getting harder and harder for investors to leave gold and gold mining stocks out of their portfolios.

For more on gold investing, watch my video below on how traders use the golden cross!

Fund portfolios are actively managed, and holdings may change daily. Holdings are reported as of the most recent quarter-end. The following securities mentioned in the article were held by one or more of U.S. Global Investors Funds as of 6/30/2020: Barrick Gold Corp. 2.03%, Amazon.com Inc. 0.00%, Alphabet Inc. 0.00%, Berkshire Hathaway Inc. Class A 0.00%.

Holdings may change daily. Holdings are reported as of the most recent quarter-end. The following securities mentioned in the article were held by one or more accounts managed by U.S. Global Investors as of 6/30/2020: Barrick Gold Corp., Amazon.com Inc., Alphabet Inc.