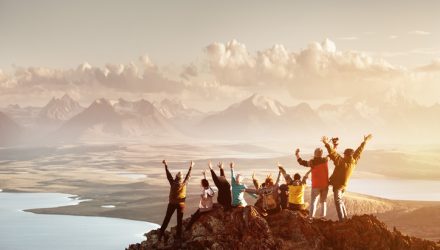 An Adventurous Bond ETF Still Worth a Look

Due to their equity-like traits, convertible bonds are considered a bit more adventurous than other corners of the fixed income space, meaning there is some downside vulnerability when equities decline. For example, the SPDR Barclays Convertible Securities ETF (NYSEArca: CWB) is lower by 2.69% this month, just slightly less bad than the S&P 500.

Convertible bonds are a type of hybrid fixed-coupon security that allows the holder the option to swap the bond security for common or preferred stock at a specified strike price. Due to the bond’s equity option, convertible bonds typically pay less interest than traditional corporate bonds. The fund, though, does not convert its holdings into shares, but investors are exposed to the equity premium due to the way the bonds are priced.

“The effect is that convertibles trade largely like the issuer’s stock when shares are rising; as the underlying stock’s value increases, so does the value of the option to receive it,” reports Nicholas Jasinski for Barron’s. “But “converts” also have a built-in floor as long as the company doesn’t default—the value of the bond’s coupon payments and principal at maturity.”

Companies, notably those with speculative-grade debt ratings, like convertible bonds because they can raise money at rates lower than those on ordinary bonds. The $3.91 billion fund turned 10 years old in April.

Other CWB advantages include convertibles’ status as the top-performing bonds when rates rise and an expense ratio of just 0.4%, more than 70 basis points below the average actively managed a convertible bond mutual fund. Long-term data indicate convertibles have actually outpaced stocks.

“In fact, since 1973, converts have outperformed the S&P 500 by an average of 2.6% annually, while registering a beta—or volatility relative to the index—of 0.73. That trend of outpacing the market with lower volatility has been true over much of the past decade as well,” according to Barron’s.

CWB isn’t the typical corporate bond fund that’s dominated by bonds issued by banks. CWB and convertibles, in general, have more of a growth feel than standard corporate bonds.

“Converts can also offer investors a way to play highflying growth stocks while keeping their risk at manageable levels. Many convertible-bond issuers are higher-growth companies such as Etsy (ETSY), Square (SQ), and Salesforce.com (CRM),” reports Barron’s.