You are at:Home»Alternatives Channel»Alternative ETFs to Hedge Potential Risks in Europe 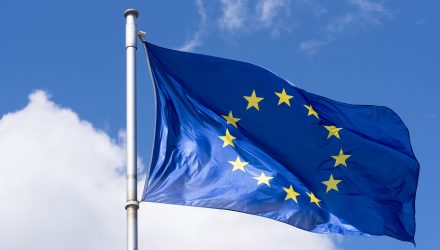 The Eurozone has shifted back to aggressive quantitative easing to support its economy, but the International Monetary Policy argued that it is not enough. Investors who are wary of a potential slump in the European economies can turn to alternative ETFs to hedge the risks.

The IMF warned that Europe needs to come up with emergency plans as monetary policy has been exhausted and will not be able to prop up the economy any further in case risks spread, Bloomberg reports.

“Given elevated downside risks, contingency plans should be at the ready for implementation,” the IMF said in its Regional Economic Outlook for Europe. “A synchronized fiscal response” may be necessary, the fund added, highlighting potential risks from trade protectionism, a chaotic Brexit and geopolitics.

The warning comes after the latest economic data revealing that the Eurozone is proving more resilient than expected. However, Germany probably went into a technical recession over the past quarter as the labor market started to weaken. Finance Minister Olaf Scholz argued that there’s no immediate need for a fiscal stimulus to prop up the country’s stalled growth machine.

“We have all the abilities to act if there is really a crisis,” Scholz said at Bloomberg’s Future of Finance event. “But there is not a crisis which we see today and which we do not expect.”

The IMF also cautioned that if the U.K. breaks away from the European Union in January without an orderly withdrawal deal in place, the country’s economic output would be 3.5 percentage points lower in two years. In addition, the EU economy would be 0.5 percentage point smaller in that scenario.

“The weakness in trade and manufacturing could spread to other sectors – notably services – faster and to a greater extent than currently envisaged,” the IMF said.

Investors who are worried about potential weakness in Europe can look to alternative ETF strategies to hedge th risks, such as the ProShares UltraShort FTSE Europe (NYSEArca: EPV), which tracks the -2x or -200% daily performance of the FTSE Developed Europe Index.