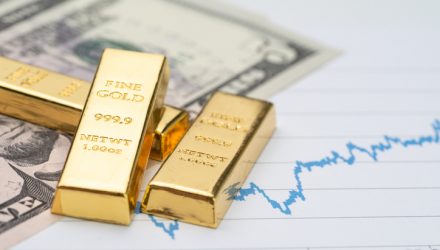 On Friday, bullion prices faltered to their lowest levels in three months, putting a damper on the near-term thesis gold. Moreover, those declines were accrued because Treasury yields and the U.S. dollar are moving higher.

Gold ETFs previously rallied amid increased expectations of a U.S. rate cut, even as some investors locked in profits from bullion’s recent rally. Gold is believed by many investors to be inversely correlated with interest rates. Rising interest rates make bonds and other fixed-income investments more attractive so that the money will flow into higher-yielding investments, such as bonds and money market funds, and out of gold, which offers no yield at all during times of higher interest rates, and back into gold ETFs.

“Gold demand is being underpinned by growth in exchange-traded funds and central bank buying,” reports Andrew Bary for Barron’s. “Gold ETFs rose by 258 tons, to 2,855 tons in the third quarter, while central banks continued to add to their gold reserves, although at a slower rate than the third quarter of 2018, according to the World Gold Council. Jewelry demand and bar and coin investments, however, were lower in the third quarter.”

As trade tensions wane, a flight from safe haven assets helped push up yields. Higher real rates diminish the relative value offered by gold, which comes with with no yield that had been benefiting from a growing amount of negative-yielding debt earlier this year, according to Naufal Sanaullah, chief macro strategist at EIA All Weather Alpha Partners, Bloomberg reports.

Investors previously embraced GLD, GLDM and related ETFs as a quick and easy way to gain exposure to gold price movements as they hedge against market risks, help protect their purchasing power in times of inflationary pressures or capitalize on increasing demand from the emerging markets with a growing middle-income class.

“The factors that boosted gold in the third quarter—concerns about a slowdown in global economic growth, lower rates, and a huge amount of negative yielding sovereign—have trended in the opposite direction lately,” according to Barron’s.