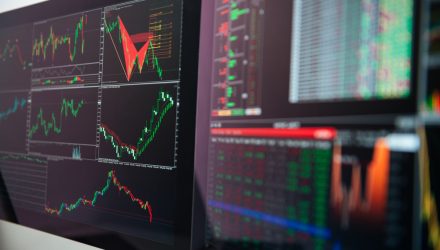 An interest-rate hedged exchange traded fund play has been surging as investors try to get ahead of a Federal Reserve interest rate hike.

The rate hedging strategy climbed again on Monday as the markets priced in even more aggressive Fed rate-hike bets. Market participants are pricing in three 25 basis-point hikes by May, or a 50 basis point increase during one of the next two Fed meetings, with rates hitting 200 basis points by mid-2023, Bloomberg reports.

The markets are even briefly pricing in an inter-meeting policy tightening move by the Fed as an emergency response to the spiking inflation levels. However, U.S. short-term interest rate futures on Monday reflected a diminished chance of a rate hike before the two-day March policy meeting, Reuters reports.

“An inter-meeting rate hike was never a likely outcome,” Lou Crandall, chief economist at Wrightson, said in a research note. “The primary goal of an emergency move in between meetings is to shore up confidence and staunch any financial market bleeding that might lead to further economic damage. That is why most inter-meeting moves are rate cuts rather than rate hikes.”

“With long-term inflation expectations well within the range of recent decades, there is nothing obvious to be gained by appearing to panic,” Crandall added.

As investors try to react to changes in the monetary policy outlook, some have turned to PFIX, which seeks to hedge interest rate movements from increasing long-term interest rates. The fund also benefits from market stress when fixed income volatility increases, while still providing the potential for income. PFIX utilizes an institutional-level strategy while bundling it in an ETF wrapper that provides both attractive liquidity and tax efficiency.

PFIX holds a large position in over-the-counter (OTC) interest rate options with the intention of providing a direct and transparent convex exposure to large upward moves in interest rates as well as interest rate volatility. By using OTC derivatives which are typically only available to institutional investors, the fund is similar to owning positions in long-dated put options on 20-year U.S. Treasury bonds. Because the option is held over a longer duration, PFIX is able to provide a transparent and simple interest rate hedge.