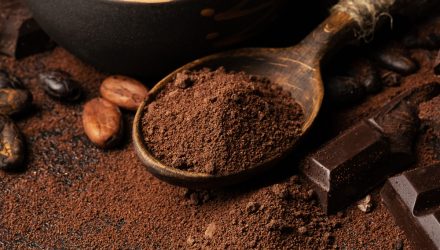 A Cocoa ETN Is Rallying on Dry Crop Conditions

The November through March months are typically the dry season in the Ivory Coast, the world’s largest exporter of cocoa beans, and the current dry conditions have been particularly rough on the growers in recent weeks, contributing to increased bets of diminished crops and sustained price gains ahead, the Wall Street Journal reports.

Most actively traded cocoa futures contracts have increased about 12% year-to-date, with 11% of the gains in February alone, to $2,811 per metric ton, or heading pace toward the highest monthly level since April 2018.

Market watchers have warned that a persistent drought could decimate crops that are set to be harvested in April. Some local buyers have even been reluctant to pay previously agreed prices for cocoa beans due to diminished quality as crops were damage by the dry weather, Commerzbank analysts said in a note.

“You see cocoa futures going up and your chocolate bar is going to be more expensive,” Peter Mooses, a trader at RJO Futures, told the WSJ.

Cocoa beans, which were down 3.2% for 2021 on steady supply levels, were one of few commodities to see prices gains recently. Meanwhile, sugar is near four-year highs, soybeans are rebounding back toward last year’s highs, and Arabica coffee is up 11% in 2022.

While light rain could improve the April cocoa crop, a sudden downpour in rain with another a dry patch could do more harm than good, analysts said.

Furthermore, a low April crop, meanwhile, could indicate a weak main crop that grows over the October to March period.

“If we see hot temperatures with no rain, this trend of [prices] moving higher is really going to continue,” Mooses added.