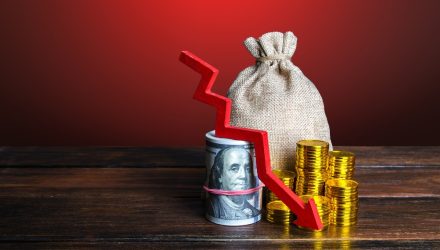 Investors should consider the benefits of the Innovator Buffer exchange traded fund strategy in the current market turbulence, especially since the defined outcome methodology can help people stay fully invested in the market up to a cap with built-in buffers against equity downside.

In the recent webcast, As Recession Risk Looms, Time To Buffer Market Exposure, John Southard, co-founder and CIO at Innovator ETFs, explained that Innovator’s suite of Buffer ETFs seeks to offer clarity and a level of certainty, offer known equity upside potential, provide known built-in buffer levels, and come with a known outcome period. The institutional-styled strategy also comes with the convenience of the ETF wrapper.

Southard argued that investors still face heightened risks ahead. For instance, bond risks persist despite the rise in yields. The Fed began its tightening cycle in March off of the lowest policy rate in history. Since 1965, the Fed has never begun a hiking cycle with inflation this high and avoided a recession. He warned that the 10-Year U.S. Treasury Yield would need to rise 5.8% to match inflation, which will be bearish for bonds. Meanwhile, it could take time to get inflation down to a reasonable level, leaving a longer runway for rates to run.

As a way to better diversify an investment portfolio, investors should consider the benefits of alternative strategies that incorporate an innate hedge to diminish downside risks but still maintain upside potential to capture market moves. Innovator ETFs’ Defined Outcome ETF strategies have a built-in buffer to help investors hedge against further swings ahead, depending on one’s level of risk aversion.

In addition, Innovator will be expanding its July series with the Nasdaq-100 Power Buffer ETF (NJUL).

The Defined Outcome ETFs provide market exposure with a built-in downside buffer. The ETFs start with a synthetic 1-to-1 exposure to the target market. They would then include a put spread to provide targeted buffers of 9%, 15%, or 30% to their respective targets. Lastly, the upside is capped by selling an upside call to finance downside buffers.

As an alternative to fixed income assets to help defend against further downturns, investors can turn to something like the Innovator Defined Wealth Shield ETF (BALT). Listing on the Cboe, BALT uses options on SPY (SPDR S&P 500 ETF Trust) in seeking to provide exposure to the equity market to a cap while targeting a significant buffer against losses in SPY each calendar quarter.

Graham Day, vice president of product and research at Innovator ETFs, explained that BALT provides investment returns by allowing investors to participate in the upside of the equity markets with a significant buffer against losses, but it does not provide fixed income typical of bonds. The Innovator Defined Wealth Shield ETF seeks to offer advisors a defensive investment strategy intended as an alternative to cash, short-term debt, and core bond strategies common in traditional portfolio construction and conservative allocations.

The ETF targets a 20% buffer every 3-month outcome period. The ETF can be held indefinitely, resetting at the end of each outcome period. While the ETF targets a 20% buffer, it could range from 15% to 20%. BALT includes synthetic 1:1 exposure to the S&P 500 ETF (SPY), a put spread to provide a buffer targeting 20%, and sell on the upside call to finance downside buffers.

Day also believed that a position combining BALT and UJUL could also complement or act as an equity alternative to traditional defensive allocations. The goal would be to create a similar risk profile, enhance upside potential, and sidestep interest rate risk.

Additionally, the Innovator U.S. Equity Accelerated 9 Buffer ETF – July (XBJL) can be seen as a buffer return enhanced note (BREN) alternative. XBJL seeks to provide investors with double the upside performance of SPY, to a cap, with an approximately single exposure to SPY on the downside and a buffer against the first 9% of losses in SPY, over a one-year outcome period.

Day also suggested that these Defined Outcome ETF strategies could be easily incorporated into a traditional investment portfolio. The strategies can be used to build a Model Buffer ETF Portfolio or compete with notes and annuities by providing a managed ETF alternative for clients. They can differentiate and streamline financial advisors’ practice since they come with no credit risk, surrender charges, or commissions. ETFs also offer daily liquidity, block trades, 1099 reporting, etc. In addition, RIAs have had success raising assets in today’s uncertain environment by incorporating the benefits of Defined Outcome ETF investing for clients.