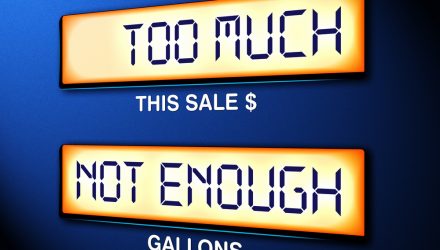 Gasoline ETF Is Down But Pump Prices Are Still Up. What Gives?

While Americans continue to face a sticker shock at the gas pumps, a gasoline-related exchange traded fund has been retreating off its record highs.

While the energy futures market has retreated from the record highs, gasoline prices at the pump haven’t.

“Across the economy, retail prices in many industries go down slower than they go up – this isn’t a new phenomenon,” Frank Macchiarola, API’s senior vice president of policy, economics, and regulatory affairs, told Bloomberg. “As we’ve seen in the past, it takes time for changing market conditions to work through the supply chain and for the price of crude oil to be widely reflected in the price we pay at local gas stations.”

West Texas Intermediate crude futures, the U.S. benchmark, have pulled back from multi-year highs above $120 per barrel after Russia’s invasion of Ukraine stoked fears of a global supply crunch, but the national average for retail gasoline prices is still above $4 per gallon.

“Last time oil was $96 a barrel, gas was $3.62 a gallon. Now it’s $4.31,” President Joe Biden said in a tweet on Tuesday. “Oil and gas companies shouldn’t pad their profits at the expense of hardworking Americans.”

However, there is a lag between crude oil price moves and what Americans have to pay at the gasoline pump as it takes time for costs to filter through the long supply chain from raw oil extracted out of the ground and the end refined product. Garrett Golding, a business economist at the Federal Reserve Bank of Dallas, explained that it takes time to acquire crude, refine it and ship it to distribution facilities, and service stations also contribute to the price lag.

“It’s not price gouging or a grand plot by the industry,” Golding said on Twitter. “This is how the business functions.”

While prices at the pump more closely track movements in the gasoline futures market, there is, unfortunately, a time lag as well.

“Unfortunately, pump prices typically adjust much faster on the way up than on the way down, so it’ll take a few weeks for the latest move to filter into what you see at the station,” Omair Sharif, president of Inflation Insights LLC, told Bloomberg. “Still, if things hold as they are now, the national average should be back below $4 per gallon in the next month (by around mid-April) and closer to $3.80-$3.85 per gallon by late April.”