You are at:Home»Featured»Alphabet Keeps ‘Crushing It’, Says Jim Cramer 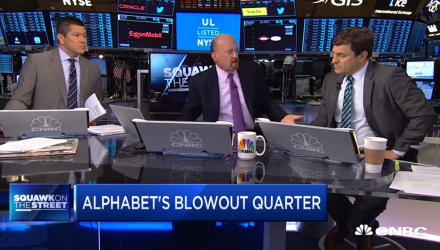 Google-parent Alphabet (GOOGL) keeps crushing it says Jim Cramer, after the tech company kicked off a huge earnings week with an impressive report, boosting share price up nearly 5% to an all-time high on Tuesday morning.

Alphabet had results that exceeded analysts’ expectations, reporting an adjusted EPS of $11.75 per share compared to the expected $9.59. In terms of revenue, Alphabet had $32.7 billion this quarter versus the expected $32.17 billion.

The surge in share price following the release of earnings grew Alphabet’s market cap by nearly $48 billion to $875 billion, placing the company in a tight race against Apple and Amazon to become the world’s first $1 trillion company.