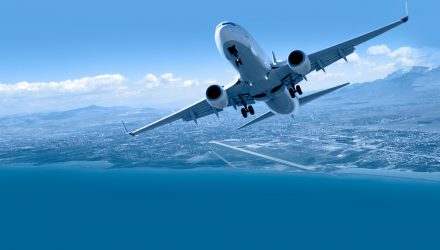 Airline ETF Takes Off as Carriers See Clear Skies Ahead

Delta Air Lines (DAL) estimated revenue in the March quarter to rebound to 78% of 2019 levels, or upwardly revised from a previous guidance of between 72% and 76%, Barron’s reports.

Southwest Airlines (LUV) projected that its first-quarter revenue could be down 8% to 10% compared to the same period in 2019, but it was still an improvement over its previous guidance for a 10% to 15% loss.

Additionally, American Airlines (AAL) said that revenue could be 17% lower than it was in the first quarter of 2019, compared to its earlier forecast of a 20% to 22% drop.

Meanwhile, carriers brushed off rising fuel costs as the surge in travel demand in the wake of waning COVID-19 infection rates has bolstered their outlook. Fuel prices, a major component of costs for carriers, jumped 37% this year through Monday. Airlines are now estimating jet fuel costs between $2.8 to $3.0 per gallon this quarter, compared to previous estimates of $2.5 per gallon.

“We’re prepared for higher fuel and confident in our ability to recapture it,” Daniel Janki, Delta’s chief financial officer, said at a JPMorgan Chase investor conference.

“Delta is well positioned to recapture higher fuel prices given disciplined approach to capacity, strong brand reference and premium product focus,” according to a presentation.

Chief executive officer Robin Hayes said at the JPMorgan conference that the airline is seeing a “very significant improvement” in revenue and strong demand for U.S.-U.K. travel, Bloomberg reports.