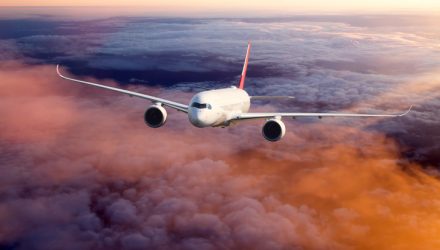 The U.S. Global Jets ETF (NYSEArca: JETS), the lone ETF dedicated to airline stocks, has been grounded in May, shedding more than 6% this month, but a slew of fundamental factors bode well for the fund.

JETS follows the U.S. Global Jets Index, which uses fundamental screens to select airline companies, with an emphasis on domestic carriers, along with global aircraft manufacturers and airport companies. The upcoming travel season is expected to be strong for airlines.

“Airlines for America (A4A), the industry trade organization for the leading U.S. airlines, announced today that it expects a record 257.4 million passengers — an average of 2.8 million per day — to travel on U.S. airlines between June 1 and Aug. 31, 2019,” according to a statement published earlier this week. “That number is up 3.4 percent from last summer’s record 248.8 million passengers. Airlines are adding 111,000 seats per day to accommodate the additional 93,000 daily passengers expected during the summer travel period.”

“Airfare inflation has been minimal for years, so one of the ways airlines have generated higher revenues is through ancillary, or non-ticket, fees,” according to US Global research. “Think fees for extra baggage, extra legroom, hotel stays, concessions, upgrades and more. Between 2007 and 2018, this type of revenue expanded 36 times, from only $2.58 billion to an estimated $92.9 billion. Cash flow has improved, and the global airlines industry is projected to book its 10th straight year of profitability.”

Buoying the case for JETS is rising international tourism, which can bolster revenue for legacy carriers.

“International tourism has surged dramatically over the past several decades, with few signs of slowing down. According to the United Nations World Tourism Organization (UNWTO), the number of international tourists steadily grown from an estimated 25 million in 1950 to around 1.2 billion in 2017. That’s an amazing 49-fold increase,” according to US Global.