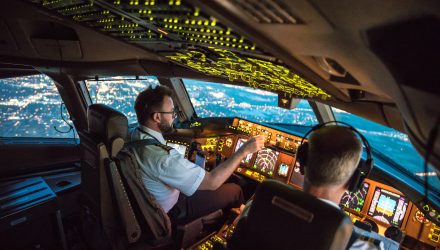 Airline ETF is Clear for Takeoff

With the holiday travel season in full swing, the U.S. Global Jets ETF (NYSEArca: JETS), the only dedicated airline industry ETF, could be poised to deliver for investors.

Despite rising fuel costs as crude oil prices steadily rise, airline stocks have strengthened in recent weeks. This transportation segment may be enjoying stronger growth on increased holiday traveling. According to Airlines for America, a record 28.5 million passengers were expected to take to the skies this year during the 12-day Thanksgiving period, or an additional 2.38 million passengers a day.

“Airline stocks have been soaring, but Ari Wald of Oppenheimer says there’s one name investors should absolutely look to buy now,” reports CNBC. “Spirit, Southwest, JetBlue, American and Delta have been on a tear over the last month, the stocks surging 21, 19, 15, 12 and 11 percent, respectively, in that time. According to the technician, Southwest’s charts look the best in terms of signaling a breakout to new highs.”

“Crossing Wall Street blog editor Eddy Elfenbein says the airlines as a group have room to run even higher based on what looks to be a strong holiday season,” according to CNBC.