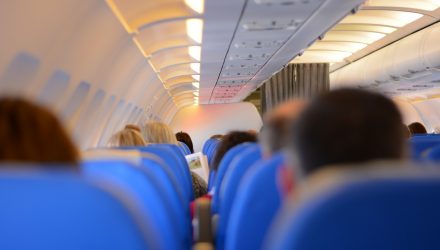 Investors who want to enhance their portfolio may look to the airline industry, explore strengthening fundamentals and consider ways for to diversify using an airline sector ETF strategy.

On the recent webcast (available On Demand for CE Credit), Your One-Way Ticket to Investing in Major Airlines, Frank Holmes, CEO and Chief Investment Officer of U.S. Global Investors, outlined a number of factors that could help support the airline industry outlook ahead. For example, there are 2 million people flying in the U.S. every day and almost 107,000 flights around the world. Looking at the global picture, an expanding middle class is expected to contribute to increased air travel, with an expected 4.2 billion global middle class in 2022 and 5.2 billion in 2028.

The airline industry also enjoys strong economic moats, or high barriers of entry in the domestic airline industry and massive hurdles to building new airports, which helps improve the competitive advantage of players in the game.

The global airline industry is expected to log another profitable year, generating $33.8 billion in net profits this year. While crude oil prices and jet fuel costs have increased, airlines continued to turn a profit and grow.

Bolstering airline industry profits, a number of ancillary or non-ticket revenue helped expand profit margins. Global airline ancillary revenue is projected to cross above $80 billion, or 10% of total revenue. Major U.S. airlines are raising checked-baggage fees, with American Airline recently announcing it will joining Delta, United and JetBlue in raising fees from $25 to $30 for first checked bags and from $35 to $40 for the second.

In addition, airlines are working in conjunction with credit card companies, and the partnership has produced deals that has acted as a growing source of airline revenues. Loyalty programs are now making up a large share of total revenue, contributing 15.3% for Southwest, 12.8% Alaska Air Group and 11.8% American Airlines, among others.