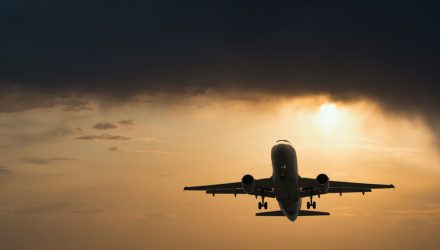 An airlines sector-specific exchange traded fund managed to gain altitude on Thursday after positive quarterly earnings from airline carriers provided an optimistic view for the year ahead.

Delta Airlines said on Thursday that the spike in the COVID-19 Omicron variant will contribute to a first-quarter loss, but that the airline still expects to turn a profit this year on stronger travel demand, CNBC reports.

Delta Airlines (DAL) shares were up 2.1% on Thursday.

CEO Ed Bastian believes that the Omicron variant could delay the rebound in travel demand by 60 days, warning of losses for January and February before profits potentially turn around in March.

“The next four to six weeks are going to be difficult,” Bastian told CNBC. “What we do see in the booking data is President’s weekend forward looks really robust. … People are ready to travel.”

Delta was the first U.S. airline to report quarterly results and provide a detailed outlook on the new variant’s impact on the airline business. Combined, airlines, including Delta, canceled over 20,000 U.S. flights over Christmas Eve and through the first week of the year as the surge in COVID-19 infections among crews left many carriers short-staffed and winter storms grounded some of the country’s busiest airports.

“So while the new variant is not done, it appears that the worst may be behind us,” Bastian said on a call with analysts and reporters.

The rest of the airline industry is also expected to recover as well after the dismal season that was racked by increased infections and weather-related problems.

“Despite some headwinds around staffing issues, we expect United Airlines (UAL) to guide to a continued sequential improvement with capacity guided to be down in the 17-18% range in Q1, which incorporates domestic capacity down in the 1% range, while international capacity remains down 27%,” noted Sheila Kahyaoglu, equity analyst at Jefferies, according to FXEmpire.

“Remaining in a Net Loss Position into Q1. We expect a continued sequential decline in CASM-ex to 11.63¢, which reflect a 9% increase vs. 2019 levels, which compares to the 13% increase we expect in Q4. Nonetheless, UAL will remain in a net loss position in Q1, before turning positive in Q2.”

United Airlines (UAL) shares were up 3.5% on Thursday.