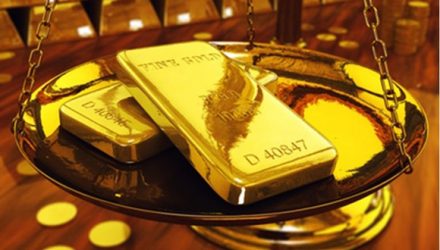 Gold has enjoyed greater demand in a low interest-rate environment as the hard asset becomes more attractive to investors compared to yield-bearing assets. However, traders lose interest in gold when rates rise since the bullion does not produce a yield. That said, GLD, the largest gold-backed ETF, jumped nearly 13% in 2017 as the Fed boosted borrowing costs three times.

Bond market participants widely expect the Fed to unveil another rate hike this week with some jittery regarding any possible clues that could indicate how many times the central bank could raise rates this year. Multiple rate hikes in 2018 are widely expected.

“Analysts suggested the price dip has encouraged buying of gold ETFs, as has nervousness about the stock market,” reports Kitco News. “However, observers suggested this ETF buying has been offset by speculative selling and liquidation ahead of this week’s meeting of the Federal Open Market Committee, which is expected to hike U.S. interest rates another 25 basis points.”

Over the past 20 years, gold has outperformed alternative and traditional assets, such as developed market stocks, hedge funds, developed markets debt, global real estate investments and the broader commodities complex, according to WGC data.

“Gold ETFs posted inflows of 14.3 tonnes Monday, their highest daily inflow since September, the bank said. This brings total inflows in the past three days of trading to 23 tonnes,” according to Kitco.