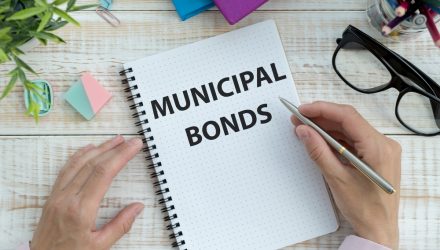 After a Quick Run Up, Muni Bond ETFs May Look Pricey

Municipal bonds have rebounded off their lows, but the munis segment may have bounced back too quickly and could be overpriced relative to Treasuries and other government-related exchange traded funds.

The municipal bond market just marked its best monthly gain in July in over two years, and this segment did not pull back as heavily as U.S. Treasuries after Friday’s unexpectedly strong labor market update, which triggered warnings that the Federal Reserve could have more leeway to enact aggressive interest rate hikes, Bloomberg reports.

Consequently, some market observers have warned that munis are now trading at their costliest level since early 2022 relative to U.S. Treasuries. Yields on 10-year tax-exempt munis were hovering around 2.25%, or 80% of the level on similar-maturity Treasuries, according to Bloomberg data. This ratio, which reflects relative value, is near its lowest since February after the outperformance in munis.

“Municipal valuations are completely unattractive at current levels — the muni market simply went too far, too fast in July and early August,” municipal strategists at Barclays Plc led by Mikhail Foux said in a recent research note. “Investors should lighten up going into September, and should look for a better entry point in the fall.”

“People either really love munis or they really hate them, we’re coming off a period where they love them and it’s harder to get allotments of deals,” John Flahive, head of fixed-income investments at BNY Mellon Wealth Management, told Bloomberg.

“The front end of the curve is very rich,” Flahive added. “It doesn’t make a lot of sense to own at these levels – you should start looking at Treasuries, T-bills with more liquidity.”