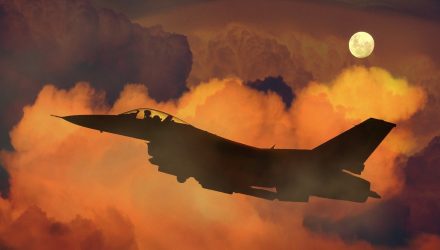 Aerospace and defense exchange traded funds, including the iShares U.S. Aerospace & Defense ETF (Cboe: ITA), were among the best industry level performers last year, but amid fears of trade wars, the group has slumped in 2018.

For example, ITA entered Friday with a one-week loss of over 5% and was dangerously close to following below its 200-day moving average. Still, some analysts believe aerospace and defense stocks can get their momentum back.

XAR is an equal-weight ETF. PPA holds 50 stocks “involved in the development, manufacturing, operations and support of US defense, homeland security and aerospace operations,” according to PowerShares.

Wells Fargo’s Sam Pearlstein “writes that defense stocks have historically outperformed most years. One recent period of underperformance, in 2009-2010, was largely due to worries about the sequester caps that came into play amid congressional wrangling about the budget, a situation he doesn’t see as similar to today,” reports Teresa Rivas for Barron’s.