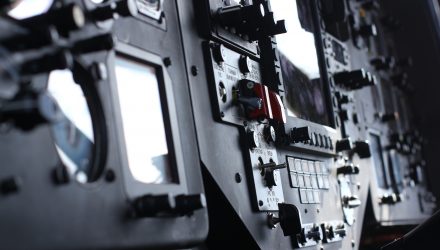 A number of market analysts feel that this run in the aerospace and defense sector could continue even after the extended bull market continues to lose steam and delve into a full-blown correction. According to MarketWatch investing columnist Philip Van Doorn, “stock prices tend to be driven by increases in earnings. The federal income tax cuts that went into effect this year will no doubt boost profits and potentially share prices. But that party will surely end, after which it is reasonable to expect the aerospace and defense subsector to continue to outperform the broader market.”

In September, the Senate approved a wide-ranging, $854 billion bill that includes a $675 billion allocation towards the Defense Department, accounting for almost 80% of the total bill. In short, the United States doesn’t skimp on defense spending, underscoring the point that next week’s midterm elections are likely to impact aerospace and defense shares.

What’s Next for Military Spending

“Military spending has been a key priority for President Trump’s administration: the Department of Defense (DoD) has increased its spending by 9% in 2018 from the prior year,” said BlackRock in a note out Thursday.

“n addition, the 2019 National Defense Authorization Act was passed at its swiftest pace in 20 years, up to $717 billion (a 12% increase from 2017),” according to BlackRock. “Even after the 13% quarter-to-date decline in the Dow Jones U.S. Aerospace & Defense Index (as of October 29th), the industry group is still up 46% since 2016 Election Day and remains the purest way to play any change in defense spending outlook.”