You are at:Home»Advisor Solutions Channel»U.S. Dollar ETF Begins to Lose Ground After a Strong Year 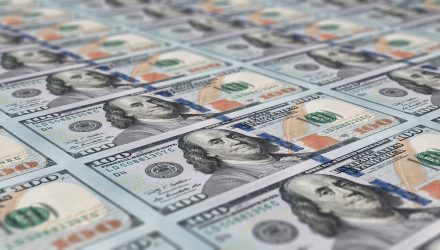 After its recent rally, the U.S. dollar and related ETF have lost some steam, weakening against its fellow developed-market peers.

As the markets try to digest the various factors affecting the currency markets, including consequences of trade tensions, the U.S. fiscal stimulus and expectations for more interest-rate increases from the Federal Reserve, analysts are now anticipating a weaker dollar outlook for the end of the year, the Wall Street Journal reported.

Analysts argued that the dollar’s strength at the start of the year was just a brief spike in a broader downward trend that began in 2017, pointing to easing of trade tensions, the ebbing effects of U.S. tax cuts and the Fed’s hesitation to tighten its monetary policy.

“We view the dollar strength this year as being a countertrend,” Jack McIntyre, portfolio manager at Brandywine Global, told the WSJ. “The real trend is a weaker dollar.”

Kit Juckes, a strategist at Société Générale, estimated that the USD is 10% overvalued against the currencies of major U.S. trade partners.

On the other hand, traders who are considering a bearish position on the dollar can capitalize on the further weakness through an inverse USD strategy, the PowerShares DB US Dollar Index Bearish (NYSEArca: UDN). UDN may be seen as the direct inverse play against UUP, rising 1.2% over the past month as the greenback weakened.