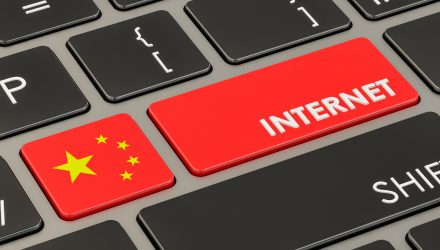 The U.S. and China are engaged in an ongoing trade spat, but that is not hindering the rapid growth of China’s Internet sector.

The KraneShares CSI China Internet ETF (NYSEArca: KWEB) is down 22.44% year-to-date, confirming that the king of China Internet exchange traded funds is following other emerging markets assets lower this year, but fundamental data paint a more positive picture. The gap between Chinese Internet stocks and their U.S. equivalents this year is stark and that could be a buying a opportunity for investors considering China.

“This is the largest price gap these two groups have experienced since 2010,” according to KraneShares. “Every day we read about trade tensions and China’s slowing GDP growth, but what has been overshadowed is the continued growth of China’s services sector, retail sales, and the expanding universe of publicly traded Chinese internet companies. We believe this is a great example of noise and sentiment creating investment opportunities.”