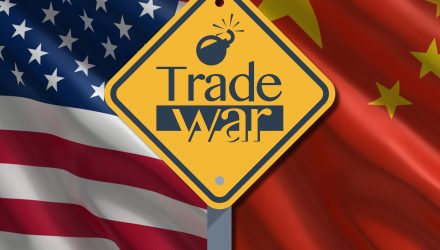 The U.S. Trade Deficit with China is a Dangerous Scorecard

With the United States and China at loggerheads over trade, investors should be aware of the many economic ties binding the two countries. Bank of America, U.S. Trust has released a new report that explores some of the finer points of U.S.-Sino relations and the strategic, but little understood, competitive advantages for corporate America.

The seven factors described below underscore the dynamism and competitiveness of U.S. companies and may help explain the resilience of U.S. large cap stocks despite ratcheting trade tensions between the U.S. and China.

Understanding Some of the Finer Points of U.S.-Sino Trade

With the United States and China at loggerheads over trade, and with a recent report from AmCham China indicating that trade tensions are hurting the businesses of U.S. firms operating in China, we thought it would be an opportune time to shine additional light on some of the finer points of U.S.-Sino relations.1

Before delving into specifics, we continue to believe that U.S.-Sino trade tensions will remain a market irritant over the near term. On the plus side, a full blown trade “war“appears unlikely; however, some damage has already been done—bi-lateral trade tensions have contributed to softer growth in China this year and a bear market in Chinese equities. Thus far, most of the pain emanating from the trade spate has been borne by China, as exhibited by its weaker equity performance this year-to-date (Exhibit 1). But the U.S. is hardly immune, as the following makes clear.

Things for Investors to Consider

One, U.S. investment in China is not as large as most think.

China, so goes the consensus, has become the “factory to the world,” leaving U.S. workers to flip hamburgers at low wages. Reality is quite different. U.S. foreign direct investment (FDI) into China has climbed during the past decade, but a little perspective is in order. The $79 billion the U.S. sank into China between 2000 and Q1 2018 equated to only 1.8% of total U.S. FDI flows to the world in the same period.2 U.S. FDI to Ireland, a country slightly larger than West Virginia, was over five times that to China in the same period. On a historic cost basis, China accounts for only 1.8% of total U.S. foreign investment. Translation: China has not attracted as much U.S. investment, absolutely or relatively, as is popularly portrayed.

Two, when it comes to foreign investment, the United States enjoys a huge lead over China.

It is no secret that Chinese investors are keen on increasing their direct investment position in corporate America. Next to America’s massive trade deficit with the mainland, China’s foreign investment in the United States has emerged as a key tension point between the two parties.

When it comes to FDI, however, America enjoys an overwhelming advantage—the U.S. corporate presence in China is orders of magnitude larger than China’s presence in the United States. In 2017, U.S. foreign investment in China (on a historic cost basis) totaled $107.6 billion, while China’s investment stake in the U.S. was just $39.5 billion—the latter was a fraction (37%) of the former. In other words, setting aside trade for the moment, U.S. firms enjoy greater access to the Chinese market than their Chinese counterparts do to the United States. This investment gap represents a strategic but little understood competitive advantage for corporate America.

Three, consumers are what U.S. firms are really after in China.

Contrary to popular opinion, access to the Chinese consumer—not workers—remains a key motivation for U.S. firms entering China. Keep in mind that China is not a unified market of 1.4 billion people, but a collection of markets with different dialects, varying levels of development and disparate per capita incomes. These variables, along with the brand sensitivity of Chinese consumers, intense foreign and local competition, and many other factors, dictate that American firms adapt to local tastes and operate on the ground. In China, customer proximity is key.

Accordingly, based on the latest figures provided by the Bureau of Economic Analysis (BEA), 83% of total sales by U.S. majority-owned foreign affiliates in China in 2016 (the last year of available data) went to the local market—substantially more than the global norm of 59%. Only 5.9% of U.S. foreign affiliate sales in China were for export to the U.S.

Fourth, what “Made in China” really means.

The mainland has emerged as an exporting powerhouse, with “Made in China” the most ubiquitous signature in the world. That said, lost on many folks is that a great deal of what China exports to the United States and the world are goods from so-called “foreign-invested enterprises”—not Chinese companies, but subsidiaries of global multinationals.