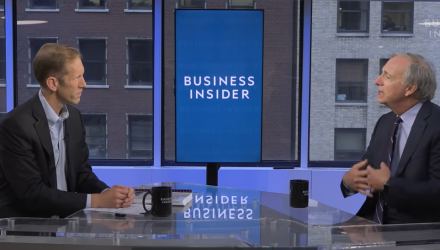 Ray Dalio is the founder and co-chief investment officer of Bridgewater Associates, the largest hedge fund in the world. Dalio is sharing his template for understanding debt crises, which he says helped him and his fund foresee and navigate the financial crisis.

Ray Dalio is the founder and chief investment officer of Bridgwater the world’s largest and most successful hedge fund. And he is a bestselling author. Coming off the launch of principles which we’ll talk about in a minute. But Ray welcome. I say you’ve written one of the largest and I have no doubt most comprehensive analyses of debt crises that I have ever seen. You say this pattern repeats itself again and again. Why write a book about this.

Well at a stage of my life I want to pass along the principles that helped me. This was really research that was done before the 2008 financial crisis and it lays out a template of how these things happen over and over again. Other words I believe that same things happen over and over again. And if you study the patterns of them you understand the cause effect relationships and then can write down principles for dealing with them well. We dealt with them very well in that financial crisis and another debt crisis. And I wanted to pass that template along. It’s actually only in the first 60 pages of the book. So it’s not a big read.

If people want to and you’re giving it away for free which is great. So we are we in the current debt cycle. You often hear lots of talk about debt. Obviously we’re now 10 years as you note past the financial crisis but debt still comes up the deficit is ballooning in the United States. Where are we in the cycle.

I think that there are six stages to the cycle I’m going to touch on that briefly. There’s the early part of the cycle where debt is being used to create productivity incomes and then it can be serviced. Well asset prices go up everything is great. And then you come to the bubble phase of the cycle and in that bubble phase you’re in a position where everybody extrapolates the past because asset goes up. They think it’s assets are going to continue to rise. And you know you borrow money and they leverage. And when you are in that phase when we do the calculations we you could start to see that maybe you won’t be able to sustain that level of debt growth. Then you come into the third phase of the cycle which is the top that’s typically the part of the cycle when central banks start to put on the brakes tighten monetary policy and the like. Then you come into the downward leg. And when interest rates hit zero percent you come into a depression. Part of that cycle because monetary policy doesn’t work. Normally when interest rates hit zero then you have to have quantitative easing and you begin that expansion and then you carry that along and you begin the cycle. Carry that. So I think the period that we’re in is very similar to the period that we were in in the 1930s. If I may. Absolutely. Explain it. OK. There are only two times in the history of this century where we had debt crisis as in which interest rates hit zero. And in both of those times the central bank had to print money and go to a different type of monetary policy which we call quantitative easing and to buy financial assets. And that drives up in both of those cases the value of those financial assets and produces a recovery but it drives interest rates down to zero or near zero where they are around the world and that buying in this case 15 trillion dollars of financial assets has put up pushed up financial assets and drive driven the interest rates down to zero. So it’s caused asset prices to rise. It’s also caused populism more populism because that process creates a gap between the rich and the poor those who have more financial assets see those asset prices go up and for various other reasons a wealth gap has developed if you look at right now the top. 10 percent the top one tenth of 1 percent of the population’s net worth is equal about to the bottom 90.