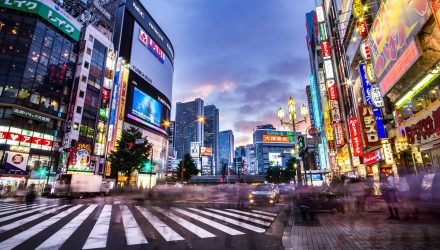 The WisdomTree Japan Hedged Equity Fund (NYSEArca: DXJ) is up nearly 9.60% this year, but stocks in the world’s third-largest economy remain unloved by many global investors. Earlier this year, the yen rallied and that could be one reason investors are skittish regarding Japanese stocks.

The Japanese yen has traditionally acted as a safe haven play, strengthening in periods global financial distress. The safe-haven status may be partly due to Japan’s record debt levels, ongoing battle with low inflation and ultra-low interest rate levels. Furthermore, the country is know as a larger exporter and maintains a current account surplus.

“Since 2013, the pattern of foreign investor flows has become progressively more volatile. 2018 was the worst year of Prime Minister Abe’s tenure from an investor flow perspective, as foreign investors pulled more than $50 billion out of Japan’s equity market,” said WisdomTree in a recent note.

While the rest of the developed economies are looking at tighter monetary policies after years of growth, the Bank of Japan is sticking to its ultra-easy policy. Consequently, investors interested in Japan may consider currency-hedged exchange traded funds to diminish potential currency risks with diverging global central bank policies.

What’s Next for Japan Investors?

“Last year, when more than $50 billion was taken out of Japan by foreign investors, we saw that Japan’s equity returns were poor, ranking behind the United States, the eurozone, the United Kingdom and even emerging markets,” according to WisdomTree. “As a result, outflows during that particular year made sense based on our behavioral assumption that poor performance correlates positively to investor outflows.”

Regarding DXJ, currency hedged ETF strategies included currency swaps to diminish the negative effects of the weaker local currency. However, potential investors should be aware that if the trends reverse or the yen appreciates against the greenback, these hedged strategies may underperform non-hedged funds.

“Japan’s forward P/E ratio is at about two-thirds that of the S&P 500 Index. The risks of emerging markets, for example, are widely known, yet these businesses are trading at even lower valuations,” according to WisdomTree.