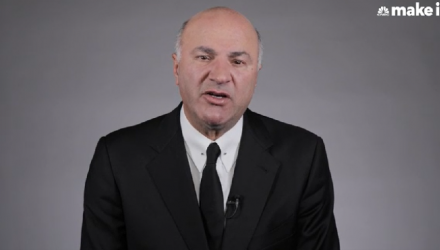 The Dow Jones Industrial Average was riding high on a post-midterm election rally on Wednesday that saw it gain over 500 points, but it was just over a week ago when the markets were getting washed through an October cycle of volatility. O’Shares ETF Investments chairman and “Shark Tank” television personality Kevin O’Leary offered his tips to investors on how to deal with market volatility when it rears its ugly head again.

October’s volatility saw massive sell-offs occurring in U.S. equities, particularly in the technology sector. The FANG (Facebook, Amazon, Netflix, Google-Alphabet) stocks that investors relied on during the decade-long bull run turned on them–since the beginning of October, the losses in the famed FANG stocks have roiled the markets :

Leaning heavily on these stocks without proper risk management wouldn’t been a mistake and O’Leary suggests investors spread out their capital applications to include a wide variety of assets.

“You shouldn’t have all of your money invested in stocks–that’s too risky–you should have some of it,” said O’Leary. “You also need some fixed income like bonds, you need some cash. Diversification is the only free lunch.”

Stay Invested for the Long Haul

As opposed to being a flash-in-the-pan day trading success, O’Leary suggests that investors allocate capital in the markets for the long haul. In order to do this, O’Leary recommends using a portion of savings or a income–ideally 10%–and investing in the stock market.

In addition, O’Leary advocates investing to be foremost as opposed to making unnecessary purchases.

“Think about all the crap you buy you don’t need–that could be put to work in the stock market,” O’Leary said. “Over time, you’ll get seven or eight percent annualized over a long period of time–that’s what it’s provided for the last 100 years and my bet is that it will continue to do that for the next 100.”

Don’t Get Flustered by Corrections

October’s roller coaster of volatility saw something that doesn’t happen often–both stocks and bonds going on the same ride as the correlation between the two asset classes saw bond prices fall with U.S. equities. In a survey by the American Association of Individual Investors, exposure to fixed-income dropped to a 10-year low, reflecting the investor fear as they fled from not only stocks, but also bonds.

As investors licked their October wounds on the sidelines, the majority were sitting on cash as opposed to staying invested. To O’Leary, this would be the wrong move to make in a correction.