You are at:Home»Advisor Solutions Channel»Kevin O’Leary: 224 Small Caps for Next 18-36 Months 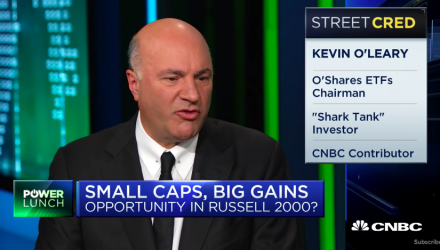 Kevin O’Leary, star of Shark Tank and founder of O’Shares ETFs, appeared on CNBC’s Halftime Report on Wednesday to share why he is optimistic about small cap stocks.

“FTSE Russell maintains the Russell 2000 – 2,000 stocks,” O’Leary said. “The ones that are going to be affected on the upside of tax reform, are the ones that make money, which many in the Russell 2000 don’t. And you have to exclude REITs (real estate investment trusts) – REITs aren’t taxed.

“I went back to FTSE Russell and said, ‘guys, this is a once in a lifetime opportunity for the next three years maybe. We are going to have this remarkable increase in free cash flow in some of those companies. Would you do the work, and let anyone license that from you, go back and get out of the 2,000 anything that doesn’t make money and anything that’s a REIT.’ Only 224 companies made the cut.”

Those 224 small-cap companies are the holdings that are held within his O’Shares FTSE Russell Small Cap Quality Dividend ETF (OUSM).