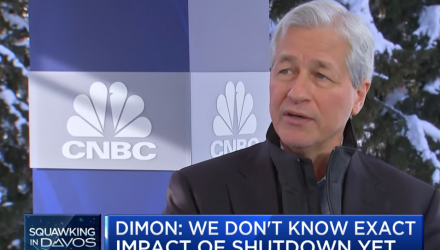 Jamie Dimon: Economy is “Like a Ship” Navigating Rough Waters

If JP Morgan CEO Jamie Dimon’s predictions about the U.S. economy are true, then investors could be in for a bout of seasickness. With fears of a global growth slowdown and the U.S. in the midst of a government shutdown, the economy could be navigating rough waters ahead.

“The U.S. economy is kind of like a ship that’s going it’s going, ex- the shutdown 2 to 2.5 percent and that’s going to keep going for a while,” said Dimon. “Then you have all this other noise, geopolitical noise, Brexit noise, what’s the Fed going to do, … shutdown, trade. They’re kind of buoys in the water in front of that ship. Eventually that may very well cause a slowdown or a recession. I don’t know 2020 or 2021, but the range of possibilities is broader and the range of bad outcomes is increasing.”

Within the backdrop of the capital markets is the ongoing government shutdown, which is now heading in its 33rd day. Dimon said a combination of sound policies communicated clearly to the public is in order.

“The thing we have to do is facts, analysis, details and not just slogans — policies well done and explained to the American public as opposed to slogans and policies that’s implemented and doesn’t work,” Dimon added.

Dimon’s latest comments come as he was quick to forewarn investors last week of a forthcoming recession. However, it won’t be akin to that of the financial crisis in 2008 where his bank and many others were left reeling.