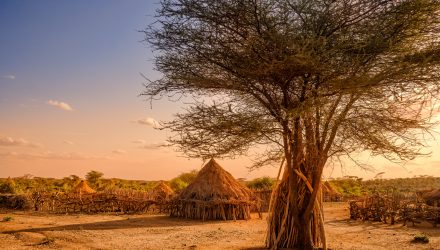 The strong dollar and tighter U.S. monetary policy are among the widely cited causes of weakness in emerging markets assets this year. Frontier markets have not been immune to those woes, either. For example, the iShares MSCI Frontier 100 ETF (NYSEArca: FM) entered Tuesday with a year-to-date loss of nearly 14%, worse than the MSCI Emerging Markets Index.

“Frontier emerging market currencies experienced sharp depreciations over the summer with notable foreign exchange reserves reductions in a handful of countries,” according to Fitch Ratings. “Pakistan, Zambia, Angola and Armenia experienced falls in their reserves as policymakers sought to support their currencies. Others, who had been building up their reserves in recent months, including Mozambique, Tajikistan and Senegal, experienced a halt in their ascent.”

Frontier markets are not as connected to each other as emerging and developed markets, which are more closely tied to the global economy – the MSCI Frontier Market Index has exhibited a low correlation to both the MSCI Emerging Markets Index and the MSCI World Index.

Data also indicate “that exports have settled into slower annual growth with outright contractions in some countries, notably Jordan, Belize, Ethiopia and Sri Lanka. A slowdown in industrial activity is becoming evident in most jurisdictions, especially in manufacturing, and should continue to weigh on trade growth given that industrial goods make up the bulk of world trade,” according to Fitch.

Many frontier markets are commodities producers and have export-driven economies, exposing these countries to external risks in strong dollar environments.

FM, the largest frontier markets ETF by assets, follows the MSCI Frontier Markets 100 Index and holds 118 stocks. Kuwait and Vietnam combine for 41.5% of the fund’s geographic exposure. The fund devotes nearly 43% of its weight to financial services stocks, more than triple its second-largest sector weight.