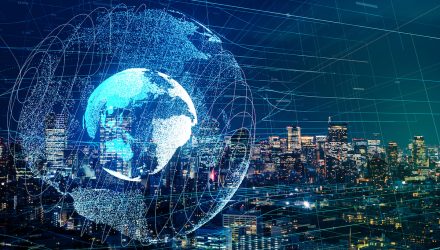 As was widely documented, 2018 was a dismal year for international equities, both developed and emerging markets. The iShares MSCI ACWI ex U.S. ETF (NasdaqGM: ACWX) slipped nearly 14% last year, but the fund is off to a solid start this year.

To start 2019, ACWX, which tracks the MSCI ACWI ex USA Index, is up nearly 4.20%. ACWX holds nearly 1,300 stocks and has a three-year standard deviation of 11.33%, according to issuer data. Last year’s pessimism pushed the forward price-to-earnings ratio of the MSCI All Country World Index, which follows 23 developed and 24 emerging markets, to around 18, its lowest level since early 2016.

Some market observers believe expected returns on U.S. stocks are lower from a  historical perspective due to high valuations. Alternatively, BlackRock sees more opportunities in non-U.S. equities, but investors will be exposed to greater risks if they seek out these areas of potentially higher returns.

“The broadest global equity index, the MSCI All Country Index, closed December at just under 15 times trailing earnings, the lowest valuation since mid-2012,” said BlackRock in a recent note. “However, the majority of that discount is coming from international markets. Looking at the ACWI-ex U.S. Index the valuation is less than 13 times earnings, a 32% discount to the 2017 peak. However, U.S. valuations are another story. While the trailing multiple on the S&P 500 is down more than 20% from last year’s peak, it has only reverted back to the post-crisis average.”