You are at:Home»Advisor Solutions Channel»Equity ETFs Gather $46B In Q1 New Money 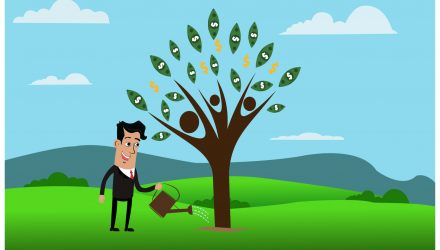 Even with outflows in March, equity ETFs gathered $46 billion of new money in the first quarter of 2018, driven by persistent demand for non-US equity exposure. Indeed, developed and diversified international equity funds pulled in $20 billion, while emerging market diversified funds gathered $13 billion, according to Bloomberg data. While the trend toward these styles was favorable, it is important to understand that they are not constructed in the same way.

iShares Core MSCI EAFE (IEFA) is a $56 billion fund that swelled by $15 billion in the first quarter of 2018. The fund earns a top rating from CFRA for the risk considerations of its holdings and its modest cost factors, including an 0.08% expense ratio and a $0.01 bid/ask spread. The fund has high exposure to Japan (25% of assets), United Kingdom (18%), France (10%), Germany (9%) and Switzerland (7%). Six of the fund’s top-10 holdings are rated as Strong Buys or Buys by CFRA, these include Nestle, Total S.A. and Royal Dutch Shell.

Meanwhile, the $70 billion Vanguard FTSE Developed Markets ETF (VEA) had $3 billion of net inflows in the first quarter of 2018. Although the ETF also earns a top rating from CFRA, it provides different country exposure. Japan (23% of assets), United Kingdom (15%) and France (8%) are the three largest markets for VEA, but the weights are lowered as the Vanguard offering provides exposure to Canada (8%) and South Korea (5%) not found in IEFA; however, as a side note, other iShares international equity funds offer stakes from Canada and Korea, such as iShares Core MSCI Total International Stock ETF (IXUS).