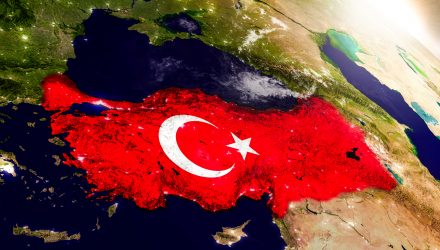 On Friday, the weakness of the Turkish market cascaded throughout the financial news, likely causing many investors to be curious what effect it could have on their portfolio. Fortunately, the direct impact has been limited, as this emerging market is relatively small and is offset in most funds with exposure to more stable and growing economies.

Already down sharply in 2018, the iShares MSCI Turkey ETF (TUR) fell 16% on Friday, pushing the year-to-date loss to 50%. More than $270 million traded in TUR, 17 times its 20-day average, according to iShares, highlighting the liquidity the ETF wrapper provides. The beleaguered local currency, the Turkish lira, dropped sharply as well Friday, relative to the U.S. dollar, as increased tariffs on Turkish steel and aluminum along with high inflation has been harmful to investor sentiment. Generally speaking, investors in a broadly-diversified emerging market fund probably have little to fear, since such funds generally have such low exposure to Turkey. However, if there is a broader economic and market reaction, even broadly diversified funds could be harmed.

TUR has $246 million in assets, making it one of the moderately-sized ETFs in the iShares single country suite that also includes the $17 billion iShares MSCI Japan (EWJ) and the $6.5 billion iShares MSCI Brazil (EWZ). TUR earns a favorable rating from CFRA due in part to our quant-based stock recommendations of its holdings and its tight bid/ask spread. Meanwhile, most investors hold more broadly-diversified emerging market ETFs and/or mutual funds in their portfolios.

Vanguard FTSE Emerging Markets Stock Index ETF class (VWO) and Admiral mutual fund class (VEMAX) had a recent 0.9% stake in Turkey, the 14th biggest country exposure far behind China (37% of assets), Taiwan (15%) and India (11%). VWO’s 7.0% year-to-date decline highlights the diversification benefits as some of these markets performed better than others.

iShares MSCI Emerging Markets ETF (EEM) and iShares Core MSCI Emerging Markets ETF (IEMG), which track different indices from each other and the Vanguard offerings, also had less than 1% stake in Turkey. For IEMG, which has a lower expense ratio and also includes more small-cap stocks, China (29%), South Korea (15%) and Taiwan (13%) were the largest country weights. Its sibling EEM had the same top country exposures, but slightly more in China and less in South Korean and Taiwan.

For example, Oppenheimer Developing Markets (ODMAX) had a 0.6% stake in Turkey, slightly below its MSCI emerging markets benchmark, despite actively taking country bets. China was the fund’s largest exposure, but at just 23% of assets, while the fund was overweighted to Russia and Mexico.