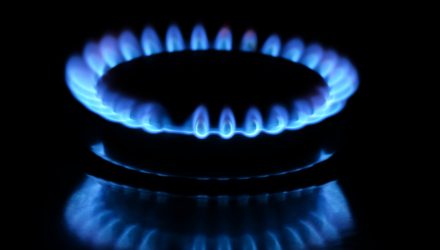 Cold winter weather across is sending natural gas and the related exchange traded products to the upside. Among Monday’s best-performing non-leveraged exchange traded funds was the United States Natural Gas Fund (NYSEArca: UNG), which was up 11% in midday trading.

“Updated forecasts show below-average temperatures persisting over the next two weeks, with the cold snap drifting eastward from the Midwest toward the East Coast,” reports CNBC. “Traders were anticipating the cold would linger, but weather models available last week didn’t give them the confidence to take long positions in natural gas futures heading into the weekend, according to Jacob Meisel, chief weather analyst at Bespoke Weather Services.”

Natural gas surged in the early stages of the fourth quarter amid expectations for cold winter temperatures in the U.S. Northeast, but that trade has unraveled in December.

“Natural gas prices have been falling since the middle of December, following a spike above $4 per mmBtu in the fall. Hotter-than-usual late summer temperatures and a surprisingly cold fall increased demand for cooling and heating last year, causing natural gas stockpiles to fall to their lowest level in over a decade,” according to CNBC.