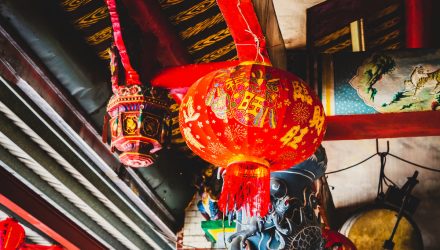 With emerging markets stocks and ETFs soaring this year, tactical investors may want to consider exposure to ETFs focusing on specific segments and themes in developing economies.

The KraneShares Emerging Markets Consumer Technology ETF (NYSEArca: KEMQ) is one of those funds. KEMQ, which debuted in October 2017, is up 13.28% this year, an advantage of nearly 470 basis points over the MSCI Emerging Markets Index.

KEMQ can be seen as the broader emerging markets counterpart to the popular KraneShares CSI China Internet Fund (NasdaqGM: KWEB). While KWEB focuses on China, KEMQ features exposure to over a dozen developing economies, but China and South Korea combine for almost 61% of the fund’s geographic exposure. There are compelling reasons for KEMQ’s 2019 bullishness and why the ETF could deliver more upside.

“We believe the greatest potential growth in EM could come from emerging market consumer technology,” according to KraneShares research. “Two critical catalysts for this trend are rising urbanization and middle-class consumption. When people move from rural areas into cities, their standard of living and income generally rise. This is occurring rapidly in emerging markets where, over the past 15 years, the total population living in urban areas has increased by more than 400 million people and average GDP per capita has more than doubled.”

“Urbanization in emerging markets has also been accompanied by a rise in household consumption, and increasingly, EM consumers are using mobile technology to purchase goods and services,” according to KraneShares. “From 2000 to 2017, household consumption in emerging markets grew by 60%, and across the same time period, mobile phone subscriptions saw average growth of 50x. This, in turn, caused an explosion of e-commerce and mobile payments in countries like China, which had $1.34 trillion in retail web sales in 2018.”