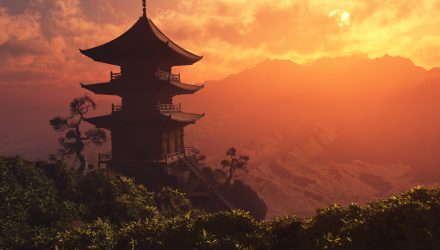 China-focused exchange-traded-funds turned the other cheek when the country’s latest gross domestic product numbers showed that economic growth slowed to 6.5% year-over-year in the third quarter, missing expectations of 6.6%.

Nonetheless, the biggest China ETFs based on total assets were up on Friday–iShares China Large-Cap ETF (NYSEArca: FXI) was up 2.55%, iShares MSCI China ETF (NasdaqGM: MCHI) rose 1.85% and KraneShares CSI China Internet ETF (NYSEArca: KWEB) gained 1.33%. The rise was largely due to a rebound in Chinese equities as the Shanghai composite and the Shenzhen composite both surged 2.58 percent, while Hong Kong’s Hang Seng index rose 0.51 percent.

Thursday’s sell-off in Chinese equities caused the Shanghai index to fall to a low not seen since November 2014. As a result, top Chinese officials from the People’s Bank of China issued public statements to help quell the fear in the markets.

“The recent stock market volatility is primarily the result of investor expectations and emotions,” said the Chairman of the People’s Bank of China, Yi Gang.

The move was announced when the People’s Bank of China instituted a 100 basis points cut to the reserve requirement ratio for a majority of banks, resulting in a capital injection of 750 billion yuan or $109.2 billion to help shore up the banking system. The central bank confirmed that this latest policy move was done in accordance with the pace of the economy as opposed to an accommodative move.