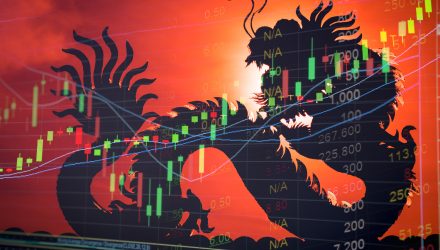 After rallying on the U.S. trade deal speculation, China country-specific ETFs slipped Friday, testing their long-term support, in response to slowing inflation and lingering uncertainties over the Sino-U.S. trade negotiations.

The slowing inflation figures suggested that demand “remained sluggish” at the start of 2019, Julian Evans-Pritchard, senior China economist at Capital Economics, said in a note. While CPI remains at a “comfortable level,” the weak producer price numbers are “a concern since these are highly correlated with profit growth in industry.”

Nevertheless, the deflationary fears spurred speculation that Beijing could step in with greater stimulus measures to rev up the economy. In the face of an economic slowdown, the Chinese central bank has been opening various credit facilities to make sure there is a steady supply of money for investment, with the bank cutting benchmark interest rates over the past year. Furthermore, with the Federal Reserve easing off rate hikes and lower inflationary pressures, the People’s Bank of China is expected to further cut rates.

Meanwhile, no definitive trade deal or advances in negotiations between the U.S. and China have come through. President Donald Trump, though, tried to assuage markets, stating that the U.S. was close to a deal with China, the Wall Street Journal reports. Negotiators agreed to further talks next week in Washington after a week in Beijing.