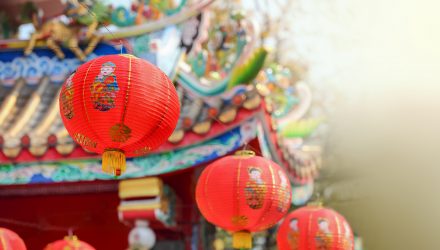 Chinese markets and country-specific ETFs were among the few areas in the green on Monday after Beijing and regulators unveiled a number of measures to support the markets.

The People’s Bank of China removed its pledge to allow “market supply and demand to play a bigger role in deciding the exchange rate” from a section on future tasks in its third-quarter monetary report, taking steps to ensure the yuan currency is stable at reasonable and balanced levels, Bloomberg reports.

The change in wording comes in face of a yuan sell-off that has pushed the currency to its weakest level against the dollar in more than a decade. The yuan depreciated 9% over the past six months and was trading at around CNY6.9636 against the dollar Monday.

“The PBOC is no longer comfortable with the yuan’s rapid depreciation and may think there’s been overshooting of the exchange rate,” Xia Le, chief Asia economist at Banco Bilbao Vizcaya Argentaria SA, told Bloomberg. “The central bank may take more measures to stabilize the yuan rather than encourage more flexibility. The currency won’t breach 7 any time soon.”