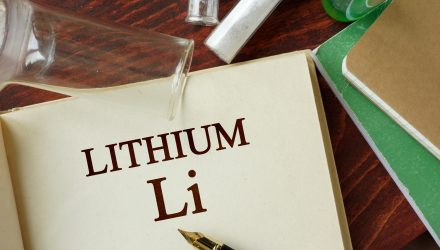 The Absolute Return Partners letter for the month of November 2018, titled, “Will Lithium Sink OPEC?”

Instead of begging OPEC to drop its oil prices, let’s use American leadership and ingenuity to solve our own energy problems.

In last month’s Absolute Return Letter – The Productivity Conundrum – I raised the curtain on fusion energy and how it is likely to affect productivity down the road. I clearly underestimated the impact my mention would have, as I received dozens of comments and questions; hence my decision to dig deeper this month.

Laptop batteries in the bathtub

What happens if you take half a bathtub of water – seawater will do – and the amount of lithium that goes into one laptop battery? The purists will probably say “not a lot” and, at first glance, that is indeed correct.

However, imagine that the ongoing research into fusion energy is a few years further down the road, and scientists find a way to commercialise a technology that has already been proven in research laboratories all over the world. A lot will now happen.

As I said last month, the fusion process – converting hydrogen to helium – releases about 10 million times more energy than what is released when burning the same amount of hydrogen. While a 1000 MW coal-fired power plant requires 2.7 million tonnes of coal per year, a fusion plant which is geared to deliver the same output will only require 250 kilos of fuel per year.

Only a few grams of fuel are present in the plasma at any point in time. This makes the fusion reactor incredibly economical in its fuel consumption, and it adds important safety features to the process. In plain English, combining the half-filled bathtub of water and the lithium from the laptop battery will lead to about 200,000 kWh of electricity – about 30 years of UK per capita electricity consumption.

Technically, what happens is that you make two hydrogen isotopes, deuterium and tritium, collide, and the fusion produces a heavier element, helium, and a neutron. Lithium is the fuel that operates the fusion power plants. You can read more about it here.

The main users of lithium

Lithium is a soft, white-ish metal that almost looks like silver. It is very light – it is actually the lightest of all alkali metals. It is either mined or it is extracted from underground pools of brine. The standard extraction technique is to evaporate water from brine, but the technique varies from country to country and from producer to producer.

It is used quite widely in the medical profession to treat mental diseases like bipolar disorder, depression, schizophrenia etc. It is also used to treat alcoholism, diabetes, arthritis and other disorders.

In industry, the main use is in ceramics, glass and battery production (Exhibit 2). Almost all laptops run on lithium fuelled batteries, and so do electric cars these days. In other words, regardless of what happens to fusion energy, the need for lithium will grow, as electric cars become more and more common, and the growing middle classes of emerging markets go digital. 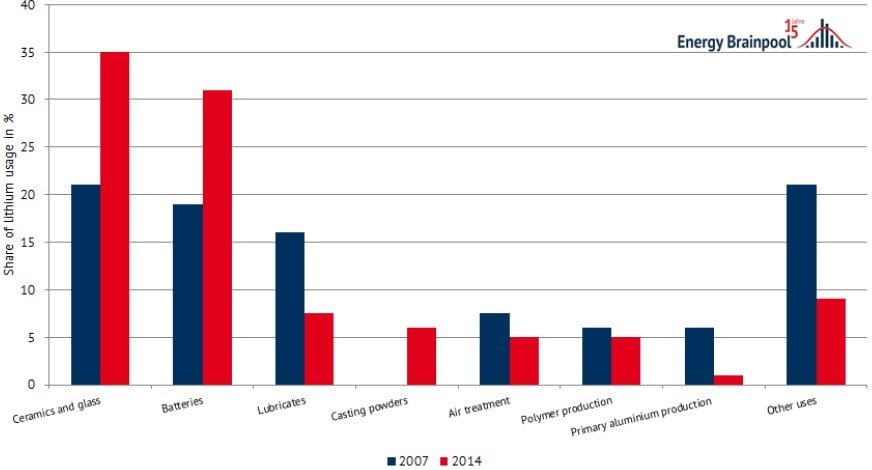 Who holds the upper hand?

Lithium can be found on all continents. China has significant reserves and so does Australia, but South America holds the biggest reserves and produces the most lithium – the majority of it in an area called the Lithium Triangle, which is where Argentina, Chile and Bolivia meet (Exhibit 3). The Lithium Triangle accounts for well over 50% of global lithium production. 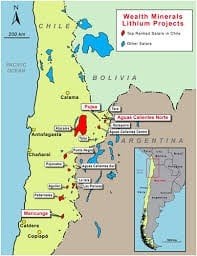 The Lithium Triangle is known for its high quality salt flats, including Bolivia’s Salar de Uyuni, Chile’s Salar de Atacama, and Argentina’s Salar de Arizaro. The Lithium Triangle is believed to contain over 75% of existing known lithium reserves with Bolivia alone accounting for about half of global reserves. See Exhibit 4 below for an aerial view of a typical brine-based lithium extraction operation – this one operated by Albemarle in Nevada.

Despite having ample reserves, Bolivia has hardly started exploiting them yet, so the country could quite possibly be in for a bright future if it can get its own house sorted out. Of the three South American countries rich on lithium, Chile is currently in pole position as it offers a much friendlier climate for businesses than the other two countries do(Source: The Economist).

Whether fusion energy ever happens or not, the outlook for lithium producers seems bright. That view is predicated on a firm belief that the world is moving towards electrification of all transportation and heating, which seems to be a reasonable assumption.

Firstly, fossil fuels are very much responsible for our greenhouse gases and secondly, there is a strong desire in the OECD to reduce its dependency on OPEC. The fact that the fossil fuel industry is a monumental user of freshwater and that it ties up ever larger amounts of capital to produce the energy we need to spin the wheels every day doesn’t make that desire any smaller.

As far as electrification is concerned, think about the ongoing electrification of the global car fleet. Lithium is a significant component in electric car batteries so demand for lithium will, as a result, increase for many years to come.

Alternatively, think of the electrification theme and combine it with another of ‘our’ mega-trends – The Rise of the East. The growing middle classes of Asia will want to go digital unless they have fundamentally different desires than the rest of us; hence demand for laptop computers, tablets and smartphones, all of which are big users of lithium, will grow for many years to come.

Another implication of the electrification theme is that commercial banks may ultimately cease to exist. Just like Amazon has disrupted retailers all over the world in recent years, a new technology called blockchain (which was invented to support cryptocurrencies) may disrupt commercial banks in the years to come. The main caveat is that everything needs to be electrified before we can take full advantage of this new technology, but the writing is on the wall.

All of the above may unfold long before fusion energy is rolled out. When that eventually happens, the implications for fossil fuel prices are severe. Coal and natural gas prices will most likely go to zero, as there will be no need whatsoever for either coal or natural gas any longer. Demand from the chemical industry (mostly to produce plastic products) will ensure that oil prices won’t go to zero, but they will almost certainly settle at levels dramatically below current levels.

It is impossible to say precisely when all of this will happen. When I began to research the topic a couple of years ago, I got the impression that commercialisation of fusion energy is still decades away with the consensus settling around 30 years. However, the insider view now is that we may only be 15 years away from delivering fusion-generated electricity to the grid, such is the momentum.

Given the dramatic impact fusion energy is likely to have on everything, investors are presented with a once-in-a-lifetime opportunity. Having said that, economic growth between now and the day fusion energy is finally available on the grid will almost certainly drive fossil fuel prices higher in the short to medium term.