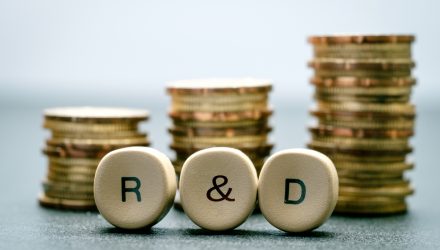 Why to Go Big on Blue Chip Stocks, R&D Potential

Until late last year, the growth factor spent over a decade outperforming its value rival. That scenario prompted advisors and investors to pump tens of billions of dollars into passive growth strategies, including exchange traded funds.

Many of those funds are friendly when it comes to fees, putting investors ahead of the game when it comes to costs. However, there are instances when active management better-serves growth investors. That could indicate a favorable setup for the T. Rowe Price Blue Chip Growth ETF (TCHP).

Growth stocks usually offer more capital appreciation than income. Other hallmarks of the group include above-average earnings and sales growth, along with higher price-to-earnings ratios. Those are the old guard traits of growth fare, but like other factors, growth is evolving and some passive strategies are slow to adapt to that evolution.

Many active funds can better-adapt to the increasing relevance of research and development expenditures in the growth lexicon. Put simply, growth companies won’t retain that status for long if they aren’t constantly innovating and reinvesting in their businesses.

Like many traditional growth funds, TCHP is heavy on tech stocks, with the sector accounting for 37.2% of the fund’s roster at the end of the first quarter. However, being overweight tech is one thing, while offering exposure to research and development is another. TCHP accomplishes both objectives.

At the end of the first quarter, TCHP held shares of Apple (NASDAQ:AAPL) and Microsoft (NASDASQ:MSFT). Not only are those two of the most cash-rich companies in the U.S., they are devoted R&D spenders, with histories of using expansive financial resources to carve out dominant positioning in new markets, creating new revenue streams and garnering sticky customers in the process.

Amazon (NASDAQ:AMZN), another savvy R&D spender, was TCHP’s top holding as of March 31.

“We foresee Amazon Web Services, advertising, and subscriptions growing faster than the company’s e-commerce business over the next decade,” writes Morningstar analyst Dan Romanoff. “Further, each of these segments drives higher margins than the corporate average, which should allow both operating profit and earnings per share to outgrow revenue as margins continue to expand.”