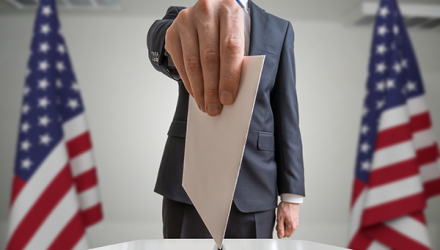 Last Saturday, Joe Biden was named president-elect. In hindsight, the market clearly predicted this outcome. As I showed you back in August, if the S&P 500 is up between July 31 and October 31 before an election, it has historically favored the incumbent party. And if it’s down, it has favored the challenger. Following a loss of 5.6% for the week before the election, the S&P was underwater about 4 basis points from the end of July.

Many of you reading this are no doubt disappointed. In a poll I ran back in August, 76% of you said you believed President Donald Trump would be better for the stock market than Biden.

I’m here to tell you there’s probably no need for handwringing at this point, especially since projections of a “blue wave” did not materialize. The fate of the Senate will be determined by two Georgia runoff races in January, but Democrats were generally unable to flip a number of Congressional seats.

Investors were strongly in favor of this development, with the S&P ending the week up 7.3%. This is a very good sign for stocks for the rest of the month and year. According to my good friend Pimm Fox, “the direction of the S&P 500 did not change from the period beginning the day after the election for the remainder of November, nor for the rest of the year.”

If history is any indication, a Biden presidency and divided Congress may very well end up being the most favorable outcome for equities. With Republicans potentially controlling the Senate, we’re less likely to see hugely consequential legislation passed such as massive tax hikes, drug pricing limits, nationalized health care and spending for the Green New Deal. Both chambers will need to compromise to pass another stimulus package. Other policy may continue to be made mostly by presidential executive order, which can easily be rolled back by the next president.

Businesses love Congressional gridlock for this very reason. Tech stocks had been trending down for days before the election as they faced antitrust scrutiny, but now that it appears certain Congress will remain divided, they’ve recovered most of their losses. The tech-heavy Nasdaq 100 jumped close to 9.5% for the week.

Focus on the Policies, Not Necessarily the Parties

Below is a chart I shared with you two years ago, after the 2018 midterm elections. Looking all the way back to 1928, average annual stock returns were highest (16%) when there was a Democratic president and split Congress, according to Bank of America (BofA). One caveat: This particular setup has a very small sample size, seen only in the last four years of President Barack Obama’s eight-year administration. 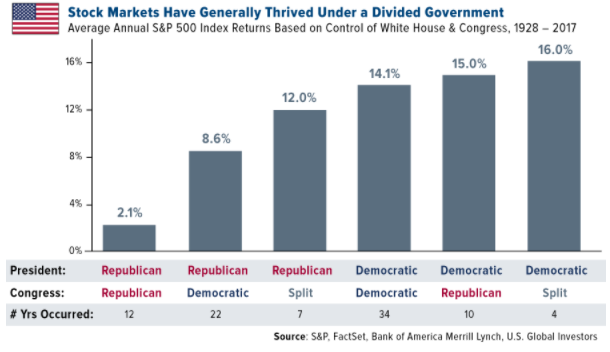 The largest sample size is when there was a Democratic president and Democratic Congress, seen in 34 out of 89 years. During those years, average returns were a still attractive 14%.

The reason I point that last part out is because you may be wondering about the ramifications should Democrats take full control of Congress in 2022. By my count, 22 Republican senators will face reelection that year, giving Democrats an opportunity to flip the upper chamber.

As I frequently say, it’s not the party that matters, but the policies. We believe government policy is a precursor to change, and that money can be made in America no matter who’s in charge.

Case in point: Stocks recovered nicely in Obama’s first term following the housing market crash, despite there being a legislature controlled by Democrats. Health care stocks, in particular, were big winners between January 2009 and January 2013, rallying more than 80%. 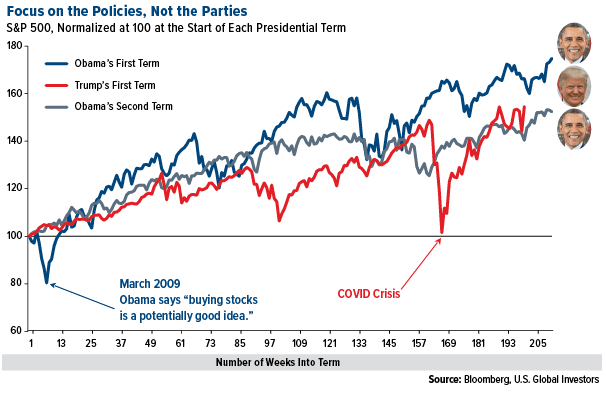 I don’t want to minimize the inflation risk if Biden is somehow able to get more extreme left-wing legislation passed. Modern monetary theory (MMT) is a real threat I’ve written about before. Last week, when it was reported that Massachusetts senator Elizabeth Warren may be interested in a Cabinet position as Treasury secretary. Vermont senator Bernie Sanders, a self-proclaimed “Democratic Socialist,” may also end up with a role in Biden’s Cabinet, as Labor secretary.

Among the inflation hedges CLSA analysts highlighted last week are gold and bitcoin. Indeed, last week was highly constructive for both assets, with gold advancing nearly 4% to trade above $1,950 an ounce. Bitcoin was trading above $16,000 today for the first time since January 2018.

Holdings in gold-backed ETFs have had an incredible run this year as investors seek a safe haven. Such products saw their 11th straight month of positive inflows in October, bringing total global holdings to over 110.8 million ounces, according to Bloomberg data. 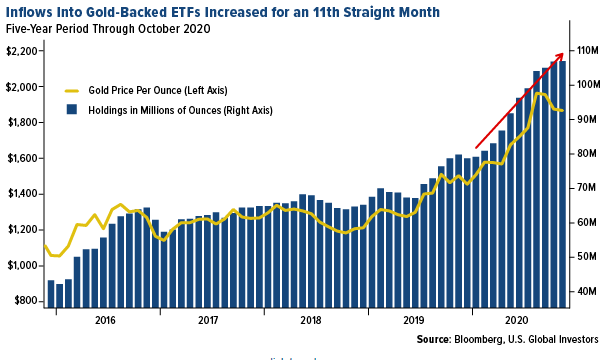 I have high expectations for Wheaton Precious Metals, which is scheduled to report after the close today. 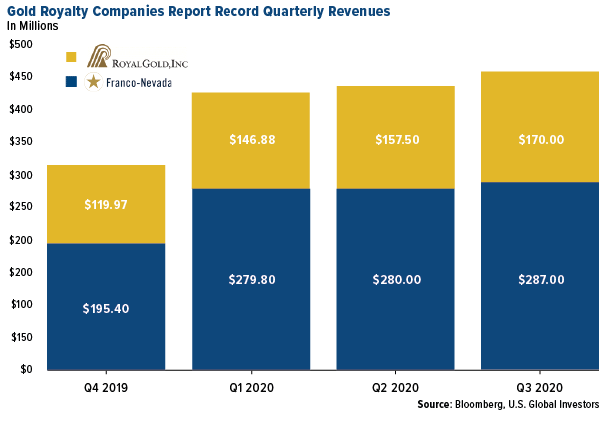 Buffett’s Midas Touch Is Back

Another company that had a blowout quarter was senior producer Barrick Gold. The company reported record free cash flow of more than $1.3 billion. On a per-share basis, free cash flow growth was up 155% from both the previous quarter and the same time last year. Shares of Barrick closed up nearly 7% yesterday on the news.

If you recall, Warren Buffett bought shares of Barrick in the second quarter, after he bashed gold for years because it doesn’t pay a dividend. (And yet neither does Berkshire Hathaway.) Perhaps Buffett’s Midas touch is back?

321gold.com founder Bob Moriarty and I discussed both companies in greater detail during our webcast last week. In case you missed it, you can watch the replay by clicking here. I know you’ll love the slides!

Under President Trump, the manufacturing sector has been very strong, even post-COVID. Last month, the U.S. purchasing manager’s index (PMI) came in at 53.3, which is on the higher end of countries ranked by PMI. 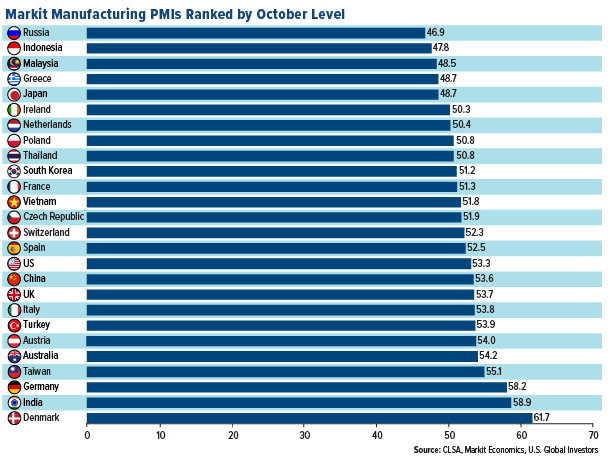 I don’t anticipate this changing or weakening under a President Biden. In July, the former vice president unveiled a four-year, $400 billion package to spur manufacturing and $300 billion for research and development. The goal is that the plan would create as many as 5 million jobs, many of them to replace those lost due to the pandemic.

Passing such a package may be difficult with Republicans in charge of the Senate, but should it become law, I expect demand for commodities and raw materials to benefit.

Speaking of commodities… Make sure you’re registered to join us this week on Thursday, November 12, for the first-ever Virtual Junior Mining Expo. To get the full details, watch the video below, then register for FREE by clicking here.

The S&P 500 is widely regarded as the best single gauge of large-cap U.S. equities and serves as the foundation for a wide range of investment products. The NASDAQ-100 Index is a modified capitalization-weighted index of the 100 largest and most active non-financial domestic and international issues listed on the NASDAQ.

The Purchasing Managers’ Index (PMI) is an index of the prevailing direction of economic trends in the manufacturing and service sectors.

Cash flow is the total amount of money being transferred into an out of a business, especially as affecting liquidity.

Holdings may change daily. Holdings are reported as of the most recent quarter-end. The following securities mentioned in the article were held by one or more accounts managed by U.S. Global Investors as of (09/30/2020): Barrick Gold Corp., Kirkland Lake Gold Ltd., Franco-Nevada Corp., Royal Gold Inc., Wheaton Precious Metals Corp.