You are at:Home»Active ETF Channel»Banks Passed the Fed’s Stress Test. What’s Next for Financial ETFs? 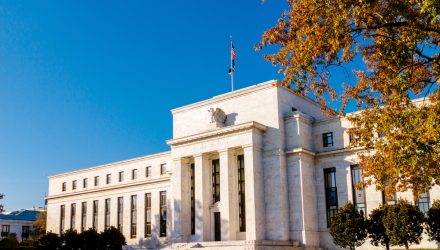 As was widely expected, major domestic banks passed the Federal Reserve’s most recent stress test, paving the way for the central bank to sign off on dividend increases and share repurchases.

Shareholder rewards, often one of the primary reasons to embrace the financial services sector, could be to the benefit of an array of exchange traded funds, including the actively managed Davis Select Financial ETF (CBOE: DFNL). Although DFNL is a concentrated, focused fund, its status as an active product indicates it could be even more levered to bank dividend increases than traditional passive funds.

If nothing else, DFNL’s managers can overweight names with strong excess capital positions. In fact, they already are.

“We calculate that most banks are carrying roughly a midsingle percentage of market cap in excess capital, with Wells Fargo (WFC) and Capital One (COF) being the big standouts, carrying over 10% in excess each,” said Morningstar analyst Eric Compton in a recent note.

Capital One and Wells Fargo are DFNL’s largest and fourth-largest holdings, respectively, combining for nearly 17% of the fund’s weight.

With banks sporting strong stress capital buffers (SCBs), shareholder rewards could be unleashed in significant fashion as soon as next month. Morningstar forecasts “mid-single-digit percentage growth” for dividends, while buybacks could be even more substantial.

“Because banks are now using the SCB framework, the types of capital return announcements could differ from past years and could be more vague, as banks aren’t seeking approval for specific plans but are instead allowed freedom in their capital returns as long as capital levels stay at appropriate levels,” adds Compton.

Not every DFNL component was among the 23 companies participating in the stress test. Not all DFNL holdings are domestic firms, and in addition to holding banks stocks, the fund is also allocated to diversified financial services firms and insurance providers.

In other words, DFNL delivers a much different view of this sector than the S&P 500 Financial Services Index. In fact, 10 DFNL components aren’t even members of that index. The difference is material, as the Davis fund is beating that benchmark by about 360 basis points year-to-date.