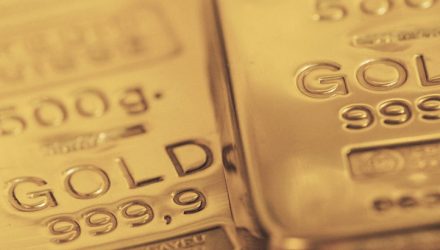 A Surprising Calm for Gold ETFs

Another possible catalyst for gold entering the back of the year is lingering debate surrounding how many times the Fed can raise rates this year – one more is what many traders are betting on, and in 2018, three seems to be the bet there.

“In the past four months, gold prices moved in a 7.6 percent range, the least in 10 years, while 120-day volatility is at the lowest since 2005. That’s amid unprecedented uncertainty over U.S. President Donald Trump’s legislative program and divisions in the U.K. over plans to leave the European Union,” reports Eddie VanDer Walt for Bloomberg.

GLD represents the fractional, undivided beneficial ownership interest in the Trust, which stores gold bullion in London vaults. The ETF currently holds about 813.8 tonnes or 26.1 million ounces of gold with a value of about $32.8 billion.