You are at:Home»Featured»A Prominent Transportation ETF Is Making a Modern Update 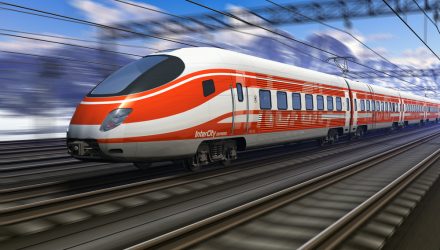 A Prominent Transportation ETF Is Making a Modern Update

A widely observed transportation sector-specific exchange traded fund is getting a major makeover, as it will soon switch out its outdated Dow Jones Transportation Average Index for a 21st century benchmark.

“The ETF has been around for 18 years, but it’s now adding the companies that have become public this century,” Todd Rosenbluth, head of ETF and mutual fund research at CFRA Research, told the Financial times.

The old Dow Jones Transportation Average Index, which was launched back in 1896 and believed to be the world’s oldest extant stock market index, will be swapped out for a more modern benchmark that tracks 21st century stocks like Uber and Lyft, along with traditional railroad and trucking companies. The newer transportation benchmark is also weighted by market capitalization as opposed to share price.

“I think it’s better that it’s a broad representation of the marketplace,” Rosenbluth said. “There will be growth companies as well as old school companies more exposed to the economy.”

For example, the ETF will have to bring Uber to about 9% of its portfolio when the switch occurs. Additionally, railroad company Union Pacific will make up a significant 16.7% of the portfolio. The United Parcel Service is expected to increase to 16.5%.

The changes in current holdings that are transferred over will experience significant changes since the old Dow Jones Transportation Average Index follows a company share price weighting methodology where companies with a higher prices have a larger weight.

“Price weighting is an anomaly, it’s an odd concept,” Rosenbluth said. “I don’t know why it was done, other than for simplicity’s sake. Market cap-weighted is the way that people tend to think about ETFs that track indices.”

Ben Johnson, director of global ETF research at Morningstar, also added that price weighting was “a relic of an era long before abundant, cheap computing power.”