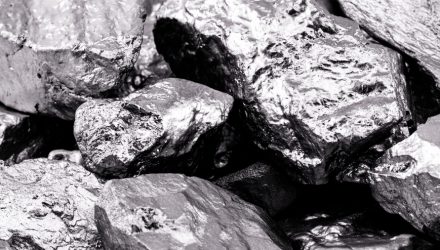 A Palladium ETF Has Surged in 2022

A palladium exchange traded fund has been quietly outperforming this year as the specter of a Russian invasion into Ukraine puts supply of the precious metal at risk.

Russia, the world’s largest producer of palladium, is consider a “crucial” component to global palladium supplies, with the country’s mining accounting for about 40% of total global production, MarketWatch reports.

The markets are now factoring in a geopolitical risk premium as Russia builds up troops along Ukraine’s border. Russia has amassed 100,000 troops along the border, raising speculation that the country could invade its neighbor after Russia annexed Crimea in 2014.

If Russia crosses into Ukraine, Peter Grant, vice president and senior metals strategist at Zaner Metals and Tornado Bullion Solutions, warned that sanctions could be placed on Russia’s mining sector. Consequently, an invasion could help push palladium prices up to $2,700 per ounce.

However, “investors should be cautious as palladium is a thinly-traded, and therefore, volatile market,” Grant told MarketWatch.

How high prices will rise will largely depends on the types of sanctions implemented. “If we have a situation where there are financial sanctions that restrict Russian entities’ access to European and U.S. banks and payments systems and vice versa, it will no doubt create frictions, delays and bottlenecks and increase the cost of buying palladium from Russia producers,” Nikos Kavalis, managing director at independent precious metals consultancy Metals Focus, told MarketWatch.

Kavalis, though, warned that the metal would “still be able to come out of the country” and the bump would see a “limited boost,” which would eventually be offset by profit-taking among traders.

Chris Blasi, president of Neptune Global, argued that that while an all-out conflict with Russia would “exasperate an already critical supply issue” in palladium, prices would still rise “more slowly and with its usual high volatility” even without a major conflict and sanctions. The palladium market has been in a deficit for years, which has helped support price gains.