You are at:Home»Fixed-Income»A Bearish Take on Treasury Bond ETFs 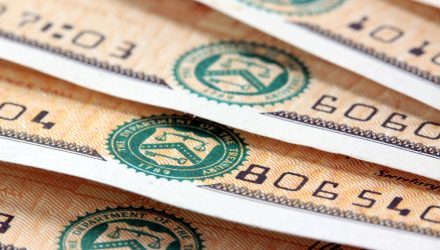 As investors grow more optimistic about the economic recovery, safe-haven assets like Treasury bond ETFs may be losing their appeal.

According to IHS Markit Ltd data, short interest in the iShares 20+ Year Treasury Bond ETF (NasdaqGS: TLT) has increased to 25% of shares outstanding, the highest level of short interest since early 2017, Bloomberg reports.

Furthermore, investors are dumping exposure to long-term Treasuries. The iShares 20+ Year Treasury Bond ETF has posted outflows every day so far this week, which puts the fund on pace for weekly withdrawals of over $1 billion, its worst weekly outflow since November, according to Bloomberg data.

Meanwhile, investors have shifted over toward the short end of the yield curve. The Vanguard Short-Term Government Bond ETF (NASDAQ: VGSH) saw $1.5 billion in net inflows over the past week, according to ETFdb data. VGSH tracks short-term Treasuries, which provides a portfolio carrying relatively little interest rate and credit risk.

Treasury yields began to tick higher this week as inflation expectations touched multi-year highs. Bond prices and yields have an inverse relationship. Further adding to the inflation outlook, the Federal Reserve Chairman Jerome Powell noted that the central bank views any jump in price pressures as short-term and will not be cutting back on its crisis-level monetary support any time soon. Richard Bernstein Advisors LLC warned that has given the green light for long-dated Treasuries to sell off.

“What they’re saying is, we want inflation and growth to run sizzling hot. We aren’t worried about inflation because we can deal with that if we have to,” Michael Contopoulos, the firm’s director of fixed income and portfolio manager, told Bloomberg. “So it’s a free pass to inflationary pressures and pressure on the long end.”