You are at:Home»Equity ETFs»5 Russia ETFs Looking to Rebound 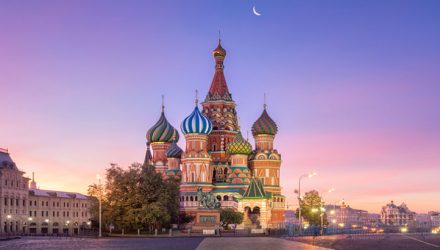 Slumping oil prices have sent the VanEck Vectors Russia ETF (NYSEArca: RSX), the largest Russia exchange traded fund trading in the U.S., lower by 7% this year, but the Russia ETF has recently shown signs of rebounding. RSX is higher by 3% over the past week.

Slumping oil prices are also hampering Russian equities, which is not surprising because the country is the largest oil producer that is not a member of the Organization of Petroleum Exporting Countries (OPEC). RSX allocates close to a third of its weight to energy stocks, including the country’s giant state-run energy firms.

“For the first half of the year 2017, the Russian stock market demonstrated the worst dynamics among the countries with developing markets with a result of -13%, losing even to Brazil, which was severely affected by the political crisis. The dollar-denominated Russia Trading System (RTS) index is now at the level of June 2016. Therefore, an investor should ask himself: isn’t this market too oversold?,” according to Seeking Alpha.

President Donald Trump has acted more friendly toward Russia and Russian president Vladimir Putin. Consequently, market observers are speculating that the Trump administration could be more willing to roll back sanctions placed on Russia in response to its actions against Ukraine. Of course, there is considerable controversy surrounding Trump’s alleged ties to Russia, a scenario that has provider the media with ample fodder and could be playing a role in hampering Russian stocks at a time when emerging markets equities are surging.