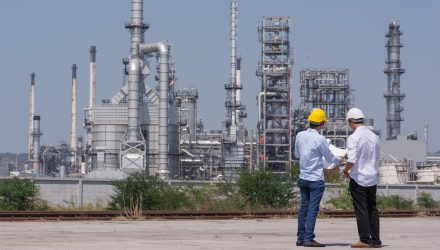 The expanding global economy has increased demand for commodities and drawn down oil inventories. For instance, according to the Energy Information Administration, U.S. crude stockpiles have declined for the past 10 consecutive weeks and are now at their lowest level since 2015. Oil services stocks are often more correlated to oil prices than their integrated peers.

Related: Oil Rally Could be Lurking

“Kumar notes that utilization have begun to ‘inch up,’ while contract durations are increasing. Oil majors are tiptoeing back into the market and hiring rigs after a ‘distinctly quiet’ 2017 for new contract activity. Financial markets appear to be opening up, given the multiple refinancing deals in recent months,” according to Barron’s.

The $1.6 billion OIH tracks the MVIS U.S. Listed Oil Services 25 Index, “which is intended to track the overall performance of U.S.-listed companies involved in oil services to the upstream oil sector, which include oil equipment, oil services, or oil drilling,” according to VanEck.