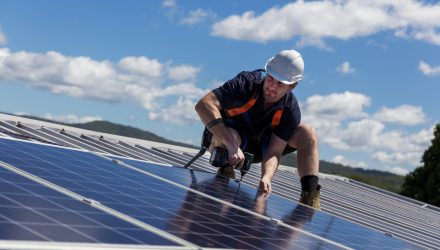 Solar stocks and related solar ETFs are suffering through a global supply glut of solar panels after China halted plans for about 20 gigawatts of domestic installations.

The Invesco Solar ETF (NYSEArca: TAN), the largest ETF dedicated to solar stocks, declined 11.9% over the past month and is down 7.0% year-to-date.

China, the world’s biggest solar market, stopped solar projects that would have equaled as much capacity as about 20 nuclear power plants, reports Christopher Martin for Bloomberg. China manufactures about 70% of the world’s solar components.

Solar panel prices were already falling this year, and the sudden drop in demand out of China may continue to pressure prices, especially with developers in other countries also delaying purchases in an attempt to drive prices down even lower.

According to PVInsights, average price of a polysilicon module dropped 4.79% since May 30, hitting a record low of 27.8 cents per watt Wednesday, which is on pace to be the biggest monthly decline since December 2016, the last time the industry was facing a global oversupply.