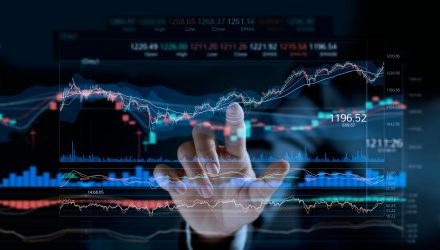 The Dow Jones Industrial Average ended Friday’s trading session with another roller coaster ride of volatility with a 300-point loss, effectively putting the Dow in the red four out of the past five days. It’s a recurring theme in an October that’s proving to be a volatile month for U.S. equities, but three exchange-traded products (ETPs) have been benefitting from the increased bouts of volatility.

While stocks are on pace for their worst October since 2008 and the S&P 500 now joins the Nasdaq Composite in correction territory, the Commerce Department did report that gross domestic product expanded by 3.5%, beating economic forecasts of 3.4% growth. However, that did little to temper the markets as the Dow fell by over 500 points early in the day.

“The 19.7 percent correction in 2011 is as close to a bear market as we’ve had in recent years. I don’t think we’ll close to that, but I think we’re heading for a deeper correction than the one we had in January and early February,” said Sam Stovall, chief investment strategist at CFRA Research.

As far as whether this volatility can sustain itself, Kenny Polcari, director of O’Neil Securities, says it could be some time before the markets settle down, but until then, these market fluctuations could be the new normal at least for the next couple of weeks.

“I think it’s going to be awhile,” said Polcari. “Because there’s been a lot of technical damage so until the market works its way, we’re going to have these volatile sessions–up one day, down another, back and forth, whipsawing all day long and so I think it’s going to last through the midterm elections.”